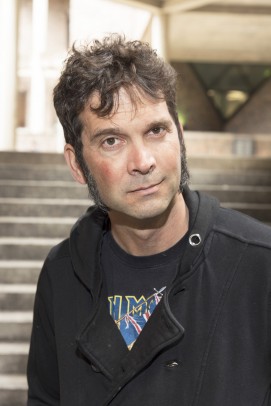 “It all comes down to evolution,” says Alan Molumby. Photo: Roberta Dupuis-Devlin

Alan Molumby is collecting his fourth Silver Circle Award this year as an outstanding teacher.

“I like that the students select them,” Molumby, clinical assistant professor of biological sciences, said of the award.

“Picture the giant lecture hall with hundreds of students — that’s the course I teach,” said Molumby, who came to UIC in 1998, shortly after receiving his doctorate in ecology and evolution at the University of Chicago. The class is required for majors, but many non-majors take it as well.

“I love teaching that class,” Molumby said. “I try to draw connections to everyday life, everyday situations and the human condition by discussing local examples in biology, and even the complicated games people play when they’re dating each other — it all comes down to evolution.”

Evolution is also a constant underlying theme in a 200-level course Molumby teaches in animal physiology.

“It’s not just about function, but evolution as well,” he said. “Evolutionary patterns make physiology more understandable. I incorporate evolution into every lecture I teach.”

For the 100-level courses, he and his department colleagues have been working to modernize the teaching labs to reflect modern investigation techniques.

“We want to make the labs less like demonstrations and more about developing the skills they’ll use as they move on in their careers,” Molumby said.

“They do individualized research projects and present them to their peers.”

Recently Molumby became director of the James Woodworth Prairie in Glenview, one of the last remaining tallgrass prairies east of the Mississippi. The prairie harbors many species not found in many other places. He has a small ongoing research program in pollinators.

“I’ve had undergrads ask me about doing research at the prairie, and I ask them: How much do you like flies?”