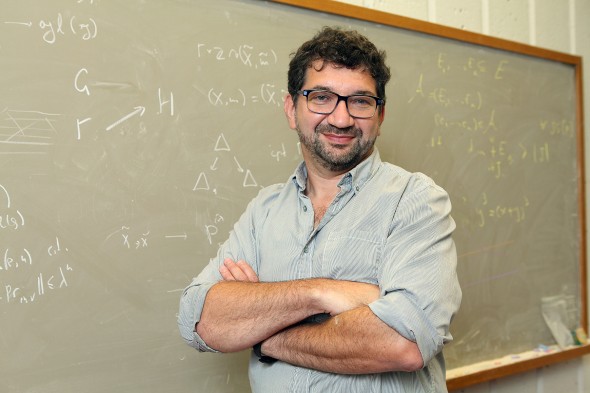 Alexander Furman, professor of mathematics, statistics, and computer science, is a highly influential mathematician “who has lately become something of an international superstar,” according to Astrida Tantillo, dean of the College of Liberal Arts and Sciences.

Furman was an invited speaker at the most recent International Congress of Mathematicians, one of the highest distinctions in mathematics. The ICM meets only every four years. His work has been supported almost continuously by the National Science Foundation, and he was recently recognized with a prestigious Simons Foundation Fellowship and was elected a Fellow of the American Mathematical Society.

“All mathematics are connected,” Furman said. “There are subfields, but everything is related to everything, and also to physics. Separation is artificial.”

Specific questions he’s interested in relate to dynamical systems, or as he puts it, “the evolution of how things got to the state they’re in.”

Ergodic theory concerns the behavior of a dynamical system when it is allowed to run for a long time. A physics example
is celestial mechanics, which govern the movement of the planets. Furman is particularly interested in systems that
exhibit a lot of symmetry, and related to algebra and geometry.

Furman says for him mathematics is a very “social” science.

“It’s a cool, interesting community of people,” he said. He plans to use some of his University Scholar funding to invite collaborators here from overseas — Israel, Germany, Belgium, Switzerland and Japan.

At UIC, he serves as director of graduate studies for the department, and he said the graduate students have a “vibrant community of young scholars.”

“They study together, joke together — it’s a very good department,” he said.

“It increases our visibility and is a lot of fun for the kids,” Furman said.