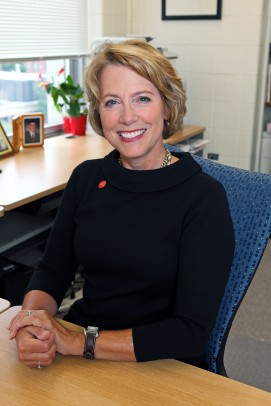 As an intensive care nurse, Mariann Piano was curious as to why some of her patients had enlarged hearts but had few risk factors for cardiovascular disease — such as high blood pressure. The one thing they shared, she discovered, was that they were all heavy and chronic drinkers.

Piano conducts groundbreaking research on binge drinking and how it can affect the vasculature, particularly in young adults. She and colleague Shane Phillips, professor of physical therapy, have discovered that binge drinking in young adults leads to vascular (artery) changes that may raise the risk for future heart disease. They have also found a blood biomarker in alcohol users to be significantly higher in binge drinkers compared to those who consume alcohol moderately.

The biomarker, called phosphatidylethanol (PEth), could be used to screen young adults for binge drinking behavior and as an objective measurement of heavy/binge alcohol consumption.

“Binge drinking is at an all-time high,” Piano said. “More students drink to get drunk, black out and choose hard liquor.”

The National Institute on Alcohol Abuse and Alcoholism defines binge drinking as a pattern of drinking that brings a person’s blood alcohol level to 0.08 or above. This typically occurs when men consume five or more drinks in about two hours. For women, it’s consuming four or more drinks in the same time period.

However, based on recent data, students binge beyond this level and average six to seven drinks per binge-drinking episode.

Strong nursing research mentors early in her career led Piano to becoming a successful nurse educator. While she has won numerous awards in her career – the latest being the University Scholar – it is particularly meaningful because she was nominated and selected by college and university peers.

“I really enjoy research and teaching,” she said. “It’s the ultimate career for me.”