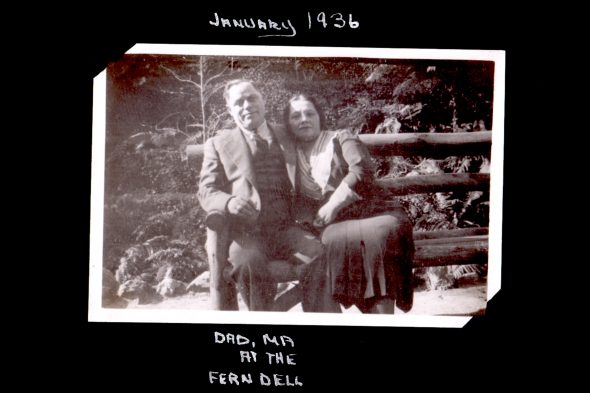 Isadore (left) and Sadie Dorin were immigrants who settled in Chicago. A family foundation is donating $3 million to UIC, which will recognize the foundation’s generosity through a term naming of the UIC Forum as the Isadore and Sadie Dorin Forum at UIC, and will provide scholarships to undergraduate students from Cook County.

Isadore and Sadie Dorin were teenagers in the early 1900s when family contacts in the United States offered them a refuge on the West Side of Chicago from the devastation of the Russian Revolution and the anti-Semitism in Europe.

In this country, Isadore and his wife Sadie, who arrived separately and met in Chicago, were able to earn enough money running a produce store to raise their five children, Leah, David, Bingy, Mollie and Bud during the Great Depression. Today, only David and Bud survive.

Since the family was raised near what is today the University of Illinois at Chicago’s campus, David, who serves as president of the Isadore and Sadie Dorin Foundation, has chosen to honor his parents by providing UIC with a $3 million gift. UIC will recognize the Foundation’s generosity through a term naming of the UIC Forum as the Isadore and Sadie Dorin Forum at UIC, as well as through establishing a permanently endowed fund to provide scholarships to undergraduate students from Cook County.

“They came over with practically nothing, no money, no access to anything; but they worked very, very hard,” said David, 98. “They were immigrants and they started something in Chicago…immigrants were a big part of making Chicago what it is and I think making the United States what it is.”

UIC plans to celebrate the gift on Oct. 28 at the launch of IGNITE: The Campaign for UIC, an inclusive, high-energy event for donors and alumni, hosted by UIC Chancellor Michael Amiridis. A formal unveiling event for the new name of the UIC Forum will be held in the spring. 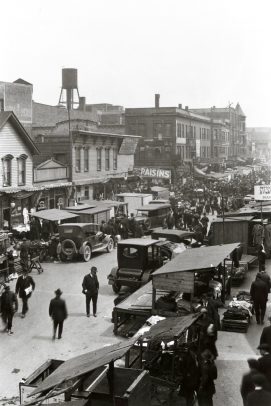 Maxwell Street in 1910 as seen from above with shoppers gathering near wooden cart vendors against backdrop of buildings.

The Dorins’ story in the United States began when Sadie and a younger brother left what is now the Ukraine and managed to get to Hamburg, Germany before sailing to this country and eventually landing in Chicago. Isadore followed a few years later when he also left the Ukraine and followed an older brother who had previously settled in Chicago.

Once here, Isadore and Sadie each found a strong, tight-knit family structure that helped support the newest arrivals of their respective families. Sadie and Isadore married after having met through their families. As immigrants, they each knew they had to contribute their share to bolster their extended family here and to help others emigrate from Europe.

“Everybody took care of each other,” said Bud, 87. “Nobody asked; it was just done. It was just how it was. They were survivors.”

Sadie had gone as far as high school in Russia, which was unusual for a female. She also learned the art of business from her father who would buy live chickens, slaughter them and sell them throughout Europe along with other food items. In Chicago, Sadie worked in a factory, earning $6 a week.

Isadore first worked as a peddler and shoveled snow during the winter months before he and Sadie opened a produce store in a rented West Side storefront where they lived in a small rear apartment. Isadore worked nearly 18 hours a day to nurture his business and provide for his growing family.

As Isadore’s businesses became more successful, he purchased a car for his wife to drive at a time when women were not typically behind the wheel. Being a short woman, she struggled to reach the controls of the Packard and look out over the windshield but her determination never stopped her from taking her children on excursions and long trips to the 1933 World’s Fair, trips to Michigan and other road trips.

Among their more prized memories, Bud and David remembered the weekly summertime trips they took from their West Side home along 12th Street (now Roosevelt Road) to the 12th Street beach where they would cool off in Lake Michigan as their mother spent the day reading and watching over her brood. 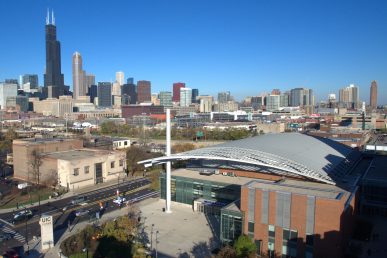 The UIC Forum which will be renamed the Isadore and Sadie Dorin Forum at UIC.

On these trips, they would drive along Roosevelt Road, often stopping at the Maxwell Street market near Halsted Street where they would take in the sounds of Italian, Russian, Yiddish and other languages.

The location of the UIC Forum at the Southeast corner of Roosevelt and Halsted Street presented a perfect opportunity for honoring their memory.

“I’m so enthused with the location, I think they’ll both look down on us here with a big smile on their faces,” said David. “They are wonderful memories.”

Isadore died in 1939 at age 45 leaving Sadie, who died in 1992 at age 102, to run the business with David before she packed up, loaded her children in her car and drove to Los Angeles where a daughter had moved after getting married.

Even though they became successful, they were frugal people and lived in basic surroundings to save money, according to their family. Even as they struggled to save what they could, they never forgot where they came from and how family helped them. As the Great Depression took its toll, more and more people would show up at the Dorin’s home for handouts of food. They never left empty-handed.

“We were taught that education was important, but also consideration and help for others. We felt an obligation to the family, the community and to live up to certain standards,” Bud wrote in a family history.

Over the years, the remaining family members set up a foundation in their parents’ name to keep their legacy alive, and it is from that foundation they are making this gift to UIC.

The Isadore and Sadie Dorin Scholarship will support undergraduate students with high academic achievement who graduated from a Cook County high school. David and Bud hope that the future beneficiaries will be appreciative of the struggles their parents had to endure.

“I know it’s not an easy thing these days to get through college,” said David. “The Dorin name is very important and I think our parents deserve all the credit they can get.”

forum, I am UIC