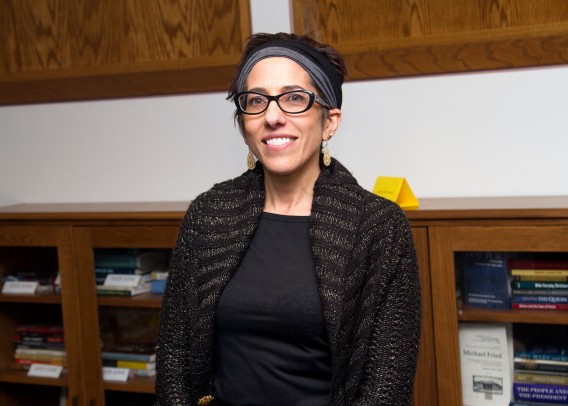 UIC senior Asal Wahdan was among the first group of UIC students to participate in an Arab American “graduation” at the Arab American Cultural Center Tuesday.

Wahdan, who is of Palestinian descent, is a member of the center, the newest group to join the Centers for Cultural Understanding and Social Change. The group celebrated its opening Tuesday with an Arab American graduation celebration featuring a dance performance, poets and speakers.

Wahdan, a Spanish and economics major from Chicago, said that while she is proud to be part of the center’s first graduating class, it’s a little bittersweet because the center is opening as she prepares to leave campus.

“There’s a huge population on campus of Arab Americans and to finally be represented after so many years is really important,” Wahdan said. “To be able to have a center that provides a safe space for people to come together and join together and get to know each other culturally is important.”

While they are distinct groups with their own agendas, the centers often support each other by co-sponsoring forums and art installations and hosting experts to discuss social justice and other issues of interest to the seven groups. Recently, when anti-Semitic flyers were found on campus, all seven of the centers’ members, with various campus departments, issued a signed letter strongly condemning the hateful messages. 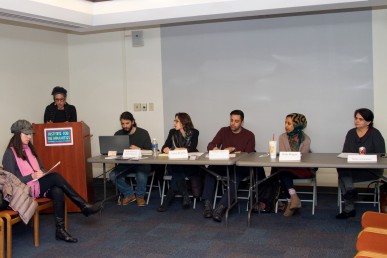 The Arab American Cultural Center recently hosted a forum on “Resources, Rights, and Resistance: The Muslim Ban and the Culture of Racism and Surveillance.” “Students have had experiences of feeling unsafe,” says Naber. (Photos: Vibhu S. Rangavasan)

When Naber was hired in 2013, the associate professor of gender and women’s studies and Global Asian Studies programs understood that while UIC was committed to diversity, there was a need for Arab and Muslim American students to find a home and an identity on campus. The center is located in Room 111 in Stevenson Hall.

The center began to take flight several years ago when it developed from the Arab and Muslim American Community Network, and after students met with the chancellor and told him of the need to have a space for Arab American students.

It’s the first cultural center serving Arab Americans on a college campus in the United States, Naber said. It stands to serve individuals who affiliate with Arab and Arab American cultures, languages, and communities, to provide education and cultural diversity to the UIC campus, and to grow UIC’s connections to  immigrant communities in the Chicago area.

“The reality is that they have been sort of invisible in terms of the university’s diversity initiatives and projects,” she said.

To help students understand their rights under the current administration, the group shares information about civil rights issues and recently sponsored a forum titled, “Resources, Rights, and Resistance: The Muslim Ban and the Culture of Racism and Surveillance.”

Other gatherings included a documentary screening as part of Sexual Assault Awareness Month. The film Duma (Dolls) by Palestinian female director Abeer Zeibak Haddad was shown to put a spotlight on family-based violence and strategies for addressing it.

The center’s organizers aimed to have  a “soft opening” before the 2016 presidential election because of the anti-Arab and anti-Muslim rhetoric that was expressed throughout the election.

The need became more apparent when Donald Trump won the election and pushed an anti-Arab and anti-Muslim travel ban. The result has been that many Arab American students are fearful and have experienced anti-Muslim bias and rhetoric even as the Arab American population in the Chicago area and in the nation as a whole has risen.

“Students have had experiences of feeling unsafe,” Naber said. “We have to think about two things: one is the rise of the anti-Muslim era coupled with the rise in immigration from the Arab region.”

Zamaan Sohel, a medical student who also attended UIC as an undergrad, said that it was important that non-Muslim and non-Arab students understand what Muslims are going through. The center helps achieve this because it stands as a center for empathy, he said.

“It’s easy in this age to live in our own bubbles,” Sohel said.

“The Arab American Cultural Center seems like the perfect fit and it’s been a long time coming.”