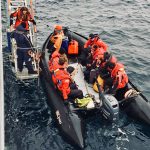 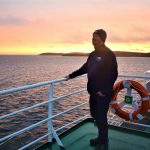 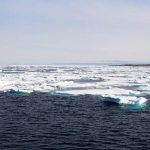 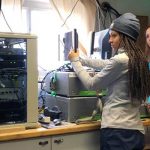 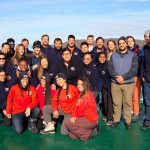 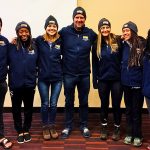 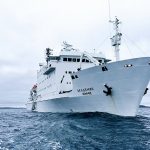 On Aug. 23, five undergraduates and one graduate student from UIC set out on a three-week research expedition through the Arctic Ocean’s Northwest Passage.

One day into the long-awaited Northwest Passage Project, which included natural and social scientists, other students and a documentary film crew, the Akedemik Ioffe vessel they were traveling aboard came to an abrupt stop approximately 80 nautical miles north of Kugaaruk in Canada’s Nunavut territory.

The ship was grounded after striking a shoal in uncharted waters. Passengers were uninjured, but the ship’s condition and the expedition’s future were uncertain.
A military Hercules plane assessed the environmental situation from above some 14 hours after the incident, but it would take days before federal and territorial authorities could reach the remote site via ship to conduct necessary inspections. Continuation of the project was no longer possible.

Less than 48 hours after embarking on the journey, plans were being made for their return to Chicago.

According to Theressa Ewa, a sophomore in biochemistry, panic was not evident among the 162 passengers, which also included an international group of older adventure travelers unaffiliated with the project.

“Everyone was trying to be positive and support each other,” she said.

Information was hard to gather and confirm while the ship slightly leaned to one side. The Canadian Coast Guard ultimately found enough damage, including water in the outer hull, to anchor the ship indefinitely.

Before the ship’s grounding, the short-lived voyage already had provided research team members with interactions with Inuit community members, polar bear and narwhal sightings, and a greater appreciation for this part of the world.

“The cultural experience was fantastic,” said Miriam Hoffmann, a senior in psychology. “I would go back just for that, but the views were also on another level. Here you get skylines, there you get glaciers, ridges and rock formations. The polar bears were cool, too.”

The students were transferred for safety during the late morning of Aug. 25 to the Akedemik Ioffe’s sister vessel, the Akedemik Sergey Vavilov, which transported passengers to Kugaaruk, where they spent the night on the ship.

The students joined other passengers in the Vavilov’s lounge, where floor-to-ceiling windows offered dramatic views of the landscape and wildlife, and inspired science and climate discussions.

“Everyone was nerding out,” Ewa said.

Stephanie Kadej, a junior in biological sciences noted, “Everyone bonded in the short time together. We got the most out of this whole situation and took every chance we could.”

A chartered plane transferred them to Edmonton on Aug. 26, and eventually connecting flights brought them back to Chicago a day or two later just as UIC’s fall semester was underway.

Miquel Gonzalez-Meler, UIC professor of biological sciences and the project’s UIC faculty liaison, is proud of the students and how they handled the situation.
“We are already used to failure in science because things don’t work sometimes. You just maneuver and react, and how you deal with the problem is what makes you grow,” he said.

“I don’t think any of them were put down by this experience. It’s not just resilience and perseverance. What it shows is that this new generation and our UIC students are the best.”

The future of the project remains unclear, but Gonzalez-Meler hopes UIC can be involved during the next attempt.

Timothy Grider, a sophomore in communication, was based at the Inner Space Center’s broadcast facility in Narragansett, Rhode Island, where he assisted with Northwest Passage Project video production and prepped participating high school students on their presentations and writing strategies.

He wants to ensure that the UIC team carries out the project’s public engagement objective and global climate message through a forthcoming video recapping the trip.
“Our goal was to learn and communicate science to the world,” Grider said.