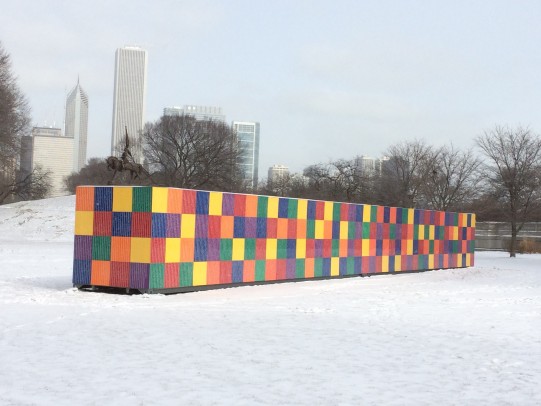 “Artists Monument,” created by art professor Tony Tasset, is on display at Grant Park through mid-July. The colorful block includes the names of 400,000 artists.

An 80-foot-long block full of color enlivens the landscape of southern Grant Park these days, thanks to artist and art professor Tony Tasset.

“Artists Monument,” first seen in New York in the 2014 Whitney Biennial, can be seen at near the corner of Michigan Avenue and 9th Street through mid-July. It was unveiled Feb. 20 in a ceremony held by the Chicago Park District, the Department of Cultural Affairs and Special Events and Kavi Gupta Gallery, which represents Tasset.

Tasset is known for monumental works, including the three-story “Eye” that drew worldwide attention when installed in downtown Chicago’s Pritzker Park in 2010, and a 94-foot-high rainbow over Culver City, California. Much of his work is a sophisticated, often sardonic evaluation of Americana, domesticity and the art world.

To create “Artists Monument,” he etched the names of nearly 400,000 artists onto brightly colored acrylic panels. The artists range from household names like Pablo Picasso and Andy Warhol to emerging artists, some of whom had only a single exhibition to their credit.

Tasset listed the artists alphabetically in a democratic tribute to several centuries of artistic production.

“Most memorials commemorate a list of names lost in a tragedy. I wanted to celebrate creation instead of destruction,” Tasset said. “This work is an absurd attempt to commemorate a giant group of artists. I know someone who was in one group exhibition in a university gallery 15 years ago, and he’s on the monument.”

The panels were installed on two shipping containers — a nod to the industrial materials of major Minimalist works — for a sculpture that measures 80-by-8-by-8 feet.