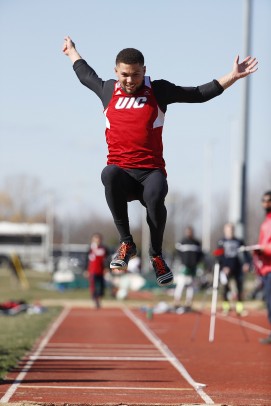 In the final day of competition at the Horizon League Track & Field Championships Sunday, senior Jordan Banks claimed the top spot in the triple jump. Banks landed a career-best jump of 48 feet, 2.75 inches.

“Jordan Banks really turns it on when it counts the most and today was no exception,” head coach Jim Knoedel said. “He grabbed the triple jump title on his last jump. He’s Mr. Clutch.”

In the final standings, both teams finished in sixth place, with the women’s squad totaling 60 points and the men collecting 58 points.

“I was very thrilled to see how well the team competed this weekend,” Knoedel said. “The conference meet is where I expect to see the best marks of the year and most of the athletes delivered. “

Senior Desirae Ranberg landed a toss of 154 feet, 2 inches for fourth place in the hammer throw.

The Flames are back in action Friday for the Dr. Keeler Invitational. The competition begins at 2 p.m. at North Central College.