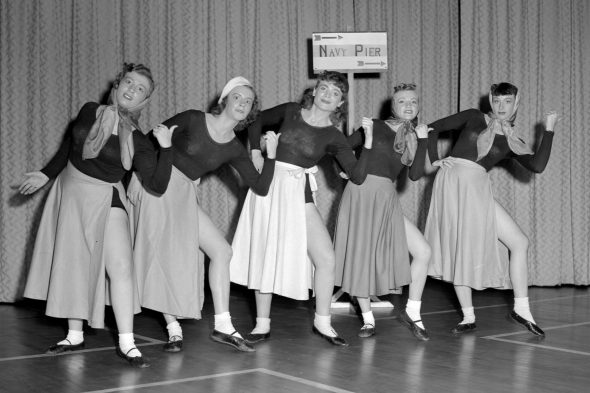 A 1948 photo shows the Orchesis Modern Dance Group performing on the Navy Pier campus. The School of Theatre and Music is celebrating 70 years. (Photo: Thomas Fehr, Copyright: University of Illinois Board of Trustees)

In 1946, as universities around the country faced huge numbers of former WWII soldiers wanting to take advantage of the G.I. Bill to get a college education, University of Illinois officials set up the Chicago Undergraduate Division at Navy Pier.

By the following year, thousands of former soldiers and others had clambered onto the pier to attend the school, nicknamed the “narrowest university in the world,” the “horizontal cathedral of learning,” and even “Harvard on the Rocks,” which would eventually morph into the University of Illinois at Chicago.

As the popularity of Chicago’s only public university began to grow, the number of courses increased and students interested in the performing arts 70 years ago finally had a home in the School of Theatre and Music.

On Oct. 27, the School of Theatre and Music will host a Platinum Jubilee as a celebration of 70 years of theatre and music at UIC. The event is a way to “dream” about its next 70 years, said Steve Everett, dean of the College of Architecture, Design, and the Arts.

“I think it is important to remember that the performing arts have been an integral part of this university since its founding at Navy Pier,” says Everett. “The arts are universally understood to be central activities in forming strong community relations and long-lasting and meaningful social connections. This 70th Jubilee is an important moment for reflection on the theatre and music program’s contributions to our students’ careers and to the cultural vitality of Chicago.” 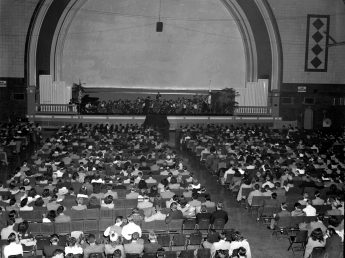 The school orchestra performing on the Navy Pier campus in 1948. (Photo: Thomas Fehr, Copyright: University of Illinois Board of Trustees)

Over the years, many gifted artists have emerged from UIC, including the Grammy Award winning jazz great Ramsey Lewis; actor Michael Gross, who played the iconic father figure to Michael J. Fox on “Family Ties;” and actor and musician Janina Gavankar, who starred in HBO’s True Blood and NBC’s “The Mysteries of Laura.”

“UIC let me be in its band, choir and everything else I chose to be in,” Gavankar told UIC Alumni Magazine, noting that the university even “respected the fact that I still wanted to take marimba lessons and allowed it as an independent study.” Theatre professors who were performing on stage in Chicago also impressed Gavankar. “I could go see their shows during semesters…I was so enamored with them, and I still am.”

The 70th Jubilee is an important moment for reflection on the Theatre and Music program’s contributions to students’ careers and to the cultural vitality of Chicago, said Everett.

“The 70th Jubilee is an opportunity for alumni from across the decades, and across the nation, to come together to reconnect, reminisce, and celebrate the work they did together,” said Christine Mary Dunford, director of the School of Theatre and Music. “It is also an opportunity for them to learn more about the exciting growth that has been happening in theatre and music at UIC over the past few years, and how they can support current students as they prepare to launch their own careers.”

In recent years, the arts have been having a greater impact on student’s lives across the university.  The theatre and music programs have ramped up its offerings of general education classes for the entire UIC student body, including new online classes. The music faculty enrolled more than 3,200 UIC students in performing arts classes in 2017. 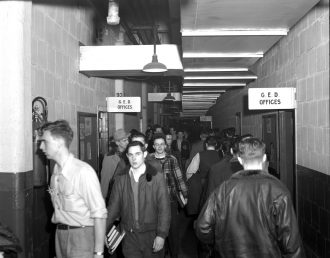 Students walking in a corridor at the Navy Pier campus in 1948. (Photo: Thomas Fehr, Copyright: University of Illinois Board of Trustees)

The department has added additional award-winning music and theatre faculty and staff with particular performing arts specialties, such as playwriting, theater design, and music technology and business, which have greatly enhanced the depth, quality, and diversity of its offerings, according to Everett. To meet student interest, new ensembles include “Mariachi Fuego” and the “Flames of Funk.”

In addition, the jubilee serves as a way to begin to dream about where the arts programs at the university should go in the next 70 years. Eventually, officials hope to gather enough interest and support to one day build a “Center for the Arts” offering additional teaching, rehearsing, performing, and design spaces to meet its increased demand among students.

“This future facility, along with the excellent faculty we have assembled, will assure UIC’s role in preparing the next generation of great arts innovators and cultural producers in Chicago,” said Everett. “The next 70 years of arts at UIC looks even brighter for our campus community and its impact on the cultural vibrancy of Chicago, Illinois, and the nation.”