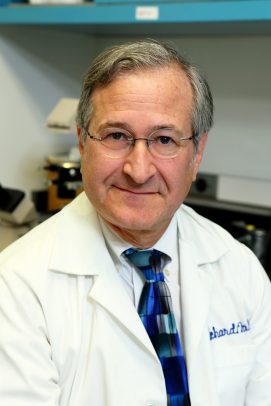 Richard Novak has been working to identify therapies and vaccines for HIV since the 1980s, when the infection first started making the news as it spread among the gay community.

Novak was a young assistant professor of infectious disease at UIC when he pushed for the hospital to open a dedicated HIV clinic because the general infectious disease department wasn’t able to handle the influx of HIV patients. That clinic opened in 1989, and just a few years later, Novak received funding to open UIC’s first dedicated HIV treatment and prevention clinics in the community in 1992.

Soon, there were seven such clinics around the city, including some that operated out of the School of Public Health’s Community Outreach Intervention Projects (COIP) clinics. Together, the clinics serve more than 1,200 people each year.

Novak was also a site principal investigator on several landmark national trials that changed the way physicians thought about HIV transmission and care. The SMART trial, which looked at giving HIV therapy continuously versus periodically interrupting treatment to prevent the development of resistance, found that continual treatment was more effective at keeping viral counts low. The START trial found that starting antiviral treatment right away was better at preventing the development of both HIV-related disease as well as non-AIDS complications, such as heart disease and cancer.

“Without these important studies, we would not have realized the importance of early, consistent treatment in preventing worsening of disease,” said Novak.

He was site lead investigator on another study that highlighted the importance of testing newly diagnosed patients for drug resistance before starting them on antivirals.

“Newly diagnosed people could have picked up the virus from someone who has been in treatment and had developed resistance to certain drugs, so it’s crucial that people get tested so that we can prescribe the most effective therapies,” Novak said. “Before these trials, medication was prescribed without consideration of resistance, but these practices could actually worsen outcomes. Screening for resistance remains the standard of care today. With more and more treatment options coming onto the market, resistance has become less of a problem.”

Novak continues to focus on preventing the spread of HIV and has recently begun recruiting participants for a clinical trial to compare the efficacy of a newly developed injectable drug to prevent new infections of the HIV virus versus Truvada, the only FDA-approved drug currently available to prevent the spread of HIV.

He’s also begun to focus on another sexually-transmitted infection: syphilis. “We’re seeing an explosion in the number of syphilis cases, in part because men are more comfortable having unprotected sex now that they are taking medications to prevent HIV infection, so other diseases that we haven’t seen in a long time are making a comeback.”

AIDS, HIV, Researcher of the Year