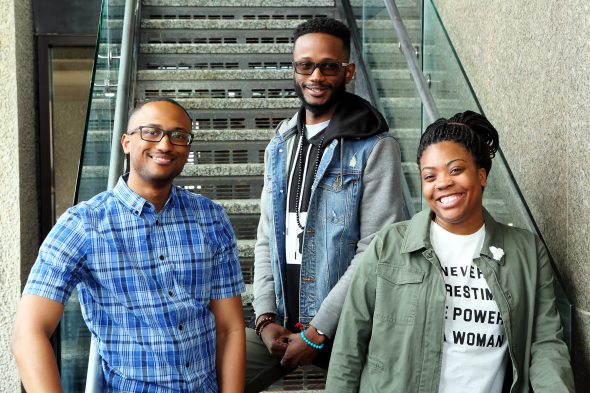 Three members of the same family will celebrate their achievements together during the College of Education commencement ceremony May 11.

Eddie Taylor Jr., his brother, Evan Taylor, and Kara Taylor, who is Evan’s wife, all share the philosophy of teaching as a way to give back.

Eddie Taylor, who will graduate with a master’s in science education, hopes to teach anatomy and physiology or biology.

“The Black Lives Matter movement made me want to do something to help the community,” said Eddie Taylor, who received his bachelor’s in animal sciences from the Urbana-Champaign campus. “My veterinary dreams or medical school dreams didn’t really work for what I wanted to do, but with urban education, I saw that as a way to actually do something with and for the community.”

As graduate students, Eddie and Evan Taylor became advocates for the underserved.

And then the brothers met Kara Taylor. Many publications and one dissertation later, Kara and Evan Taylor went to Busy Burger for their first date. They married last August.

“[Evan and I] formed a friendship through our research group,” Kara Taylor said. “We saw each other in a lot of research capacities, we researched together, we saw each other as teachers and knew each other’s teaching practices. I’m a nerd for that kind of stuff. An awesome teacher makes me happy.”

As a longtime student and a teacher, she’s weathered late nights and financial hardships.

“It’s surreal,” Kara Taylor said about her time at UIC.

“It’s impossible to do all this by yourself,” added Evan Taylor.

They all noted that friends, professors and mentors have helped them get where they are now, and that they’re excited for what’s to come.