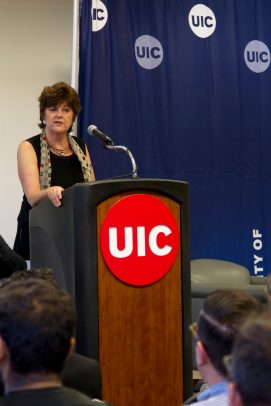 Our democracy is in crisis, says Nancy MacLean.

MacLean, a Duke University historian, has spent years of her life unraveling the hows and whys.

On Tuesday, she spoke with the UIC community about what she’s discovered — one piece of the puzzle with two major players: 1986 Nobel prize winner James McGill Buchanan and industry billionaire Charles Koch, the main characters of her most recent book, Democracy in Chains: The Deep History of the Radical Right’s Stealth Plan for America. She used talking points from the nonfiction title as a platform for this month’s Campus Conversation, a series sponsored by the Office of the Provost where experts are invited to speak about current events. A discussion session, when guests are encouraged to ask questions, now takes place immediately after.

During her visit, MacLean explained her historiography and research, which has received widespread attention from people across the political spectrum since her book release in June. The reason? MacLean, a William H. Chafe professor of history and public policy, exposes a well-funded, 60-year government takeover led by the radical libertarian right, operating under the flag of modern conservatism. The group, supported by billionaire and multimillionaire donors, has many end goals, but three stand out: strip the majority of Americans’ power, change the Constitution and alter the rules of democratic governance.

Until his death in 2013, Buchanan was heavily invested in the secretive movement. His lifelong work in public choice theory, which concluded that politicians are motivated by self-interest and not public good, is used as a crucial building block for the group’s strategic efforts to shackle the model of citizen-driven government in the United States, as well as gain economic liberty and free-reign capitalism. Koch, CEO of the second-largest privately held company in the nation, has also been a major backer and influencer from the start.

With calculated moves, they’ve managed to keep the plan under wraps.

“The noisiest [political] threats”—like race baiting from the White House—”are getting the most attention,” said MacLean, so the movement remains, for the most part, unnoticed in the public sphere.

The group also uses “other popular sections of the right and the prejudices that they reflect, the religious white and the white supremacist right in particular, to get what they want,” she added. Using this strategy, MacLean said, the radicals’ cause has already quietly dominated close to 30 states, federal agencies and even U.S. courts. A threat of a constitutional convention, which could organize with enough pressure from the Koch donor network, looms, too.

“Understanding what we’re up against is vital to assessing how best to defend a democracy,” said MacLean, acknowledging the full room of listeners. “Knowledge is power.”

“I thought it was a really interesting talk,”said Emma Harmon, a student who attended. “I learned to be aware of the strings that are being pulled around us, and how to keep our eye on the prize for a society that’s fair and equal for everyone.”