Engineer’s career plans are out of this world 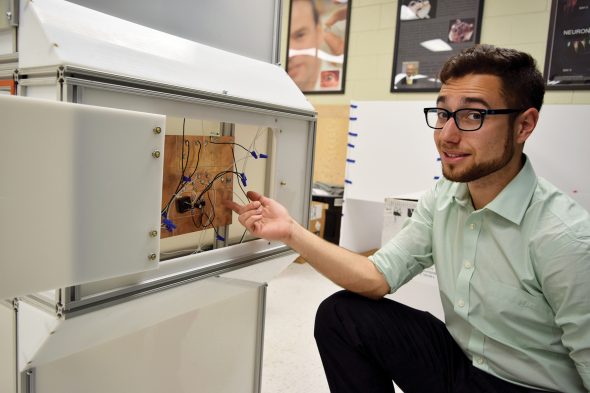 It’s common to hear people say they want to grow up and change the world. Even more rare, though, is when someone grows up and says they want to change two worlds.

However, growing up to change multiple worlds is becoming a reality for senior Barak Stoltz. After graduation, the mechanical engineering student will work for SpaceX, the famous aerospace company founded by Elon Musk in Hawthorne, California.

Stoltz’s journey to working with SpaceX —an aerospace company with the goal of enabling people to live on other planets — started with him first making a tremendous impact on the lives of people on this planet through Engineering World Health.

“Engineering World Health is a biomedical engineering organization that creates devices for people in third-world countries, and I eventually worked my way up to manager,” Stoltz said.

“My first project was a flow hood project that you mix medications under. So, they (Engineering World Health officials) go to Vietnam and scope out the area and you see what projects they need to work on. The laminar flow hood was in a neonatal hospital, and they were mixing medications out in the open.”

His work with Engineering World Health opened the door for him to earn an internship with SpaceX, which helped shape him as an engineer.

“That professionalism and the documentation and the getting-stuff-done aspect of the industry is what you get when you go to an internship with a real company with deadlines, ambition and money. That drive to complete products and get them out the door, all while teaching others, too,” Stoltz said.

Being the people-first person he is, Stoltz had UIC in mind when working at SpaceX.

“When I came back, I wanted to make sure everything I learned at SpaceX — the technical skills and everything else — was brought back with me,” Stoltz said.

Stoltz, who was born and raised in Israel, credits UIC for exposing him to a wide variety of people from diverse backgrounds.

“It was the people I hung out with at UIC — older and younger — who showed me what I can do and what can be accomplished as a student and as an individual,” he said.

“There are so many people from other countries, and you see the way they culturally operate, the way they treat each other, and cultural norms they have in other countries, and it really opens your eyes to the norms we have in the U.S. They really kind of broaden your scope of understanding of how this world works, how society works, and how you can be a better understanding and contributing member of society.

“It made me a more understanding person.”