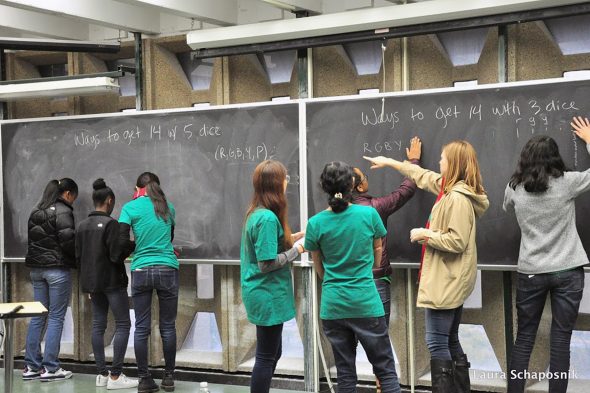 At Sonia Kovalevsky Math Day, students in grades 8 through 12 learned about the theory of probability through lectures and games. ­(Photos: Laura Schaposnik)

As a child, Sonia Kovalevsky spent hours wondering about the meaning behind the calculus notes that covered her bedroom walls.

Female students in middle and high school shared in that wonder at the third annual Sonia Kovalevsky Math Day Nov. 4, hosted by the UIC Chapter of the Association for Women in Mathematics.

Despite being barred from university, Kovalevsky’s interest, talent and persistence in the subject led her to become the first woman to receive a PhD in mathematics in 1874.

Today, colleges and universities throughout the country host the event in her honor to encourage and support girls in the study of mathematics. UIC became the first Chicago institution to contribute to this initiative in 2015, when Laura Schaposnik and James Unwin began organizing the event on campus.

“It’s a different kind of math than you get in school,” said Unwin, research assistant professor of physics. “In school, it’s very computational and you try to get practical skills, and here we’re teaching them very interesting and different topics.” 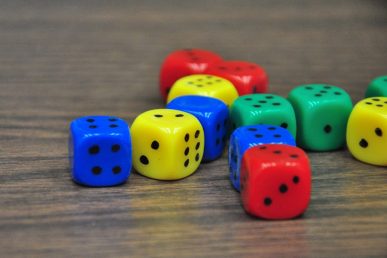 This year’s theme, “Games of Chance,” explored topics in the theory of probability with lectures, workshops and problem-solving competitions. Once introduced to a property, the students, who ranged from grades 8 to 12, were asked to demonstrate it using objects such as custom dice and applications of the game show “Let’s Make a Deal.”

“It’s one of those things to show how math shows up in surprising places,” said Unwin.

Participants from suburban and Chicago schools built new relationships while solving problems in groups. In addition to prizes, they were given T-shirts, lunch and books about prominent mathematicians, which they are meant to read, then pass along to the next math enthusiast.

“We want to make sure that they still communicate and they know that there are other women, other girls interested in math,” said Schaposnik, assistant professor of mathematics.

Although the graduate student volunteers included both women and men, women taught the majority of the sessions, further reinforcing not only the capability of women in mathematics, but their integral role in the advancement of the subject, as well.

At the event, the girls were also introduced to some of UIC’s other offerings in the field of mathematics.

“There’s lots of faculty that would be happy to help young high school students do mini-research projects if they wanted to,” said Schaposnik. “Having close mentorship from early stages seems to be quite effective.”