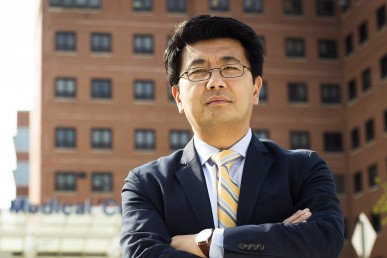 Dr. K. Luan Phan is professor of psychiatry and director of the mood and anxiety disorders research program in the UIC College of Medicine. He is also chief of neuropsychiatric research at the Jesse Brown VA Medical Center in Chicago.

Phan’s research focuses on using functional magnetic resonance imaging (fMRI) to determine which parts of the brain are involved in different mood and anxiety disorders. Using fMRI, Phan also studies acute and chronic stressors and their role in depression and anxiety. His research has found that childhood poverty and chronic stress may lead to brain changes related to problems regulating emotions as an adult. Phan also studies how certain medicines and illicit substances, including THC/cannabinoids, MDMA, alcohol, oxytocin, benzodiazepines and SSRIs can impact brain function and behavior. He has shown that alcohol intoxication reduces communication between two areas of the brain that work together to interpret and respond to social signals. His studies have also uncovered disruptions in brain function in people with anxiety and depression, and how treatments such as SSRIs and cognitive behavioral therapy can lessen those disruptions.

Phan is also interested in post-traumatic stress disorder and depression among veterans. He became interested in psychiatry through his experience meeting veterans at the VA who served in his home country of Vietnam and witnessing first-hand the psychological effects of war on these veterans. Phan hopes to uncover how PTSD and depression affect the brain; determine if there are brain markers for these disorders that can be used to help in diagnosis and prognosis; and determine which therapies would best treat the disorder in individual patients.

Fear of the unknown common to many anxiety disorders