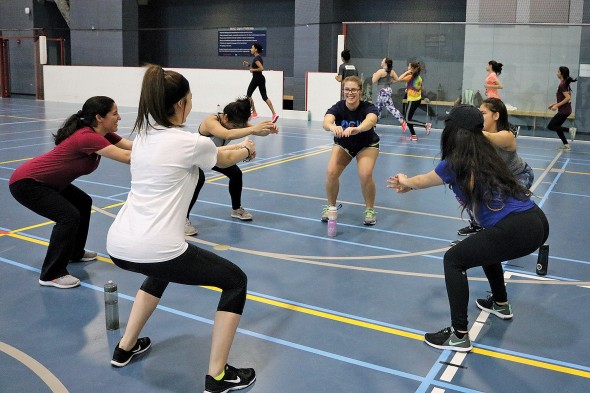 Students involved with the CHAARG student organization meet twice a week to work out together.

With fitness culture on the rise but the “freshman 15” still plaguing some undergraduates, CHAARG helps female college students find their fit.

“I had lost my passion for running and even quit the track team at UIC my first semester of college,” Mendoza said. “Even worse, I stopped going to the gym and started getting into a routine of just going to class, doing homework and sleeping.”

Mendoza’s friend introduced her to the national CHAARG organization.

“When I saw the bond between all the girls, that was when I knew I wanted to start a chapter at UIC,” she said.

Still, Mendoza had a lot of work to do to make CHAARG thrive.

She assembled an executive team and recruited members. During the group’s first semester on campus, they recruited an impressive 75 members, and last fall, they grew to 105 members.

Kimberly Lazzara, the group’s vice president of membership, prides herself on CHAARG’s growing presence on campus. She describes the group as “a workout sorority.”

They meet twice a week: once for a one-hour class led by instructors from a variety of fitness studios, as well as a small group meeting where 10 to 15 members work out together. Cost to join is $45.

“You’ll build a close bond with those girls because of the smaller setting,” she said.

Those bonds are evident among chapter members.

“CHAARG has been an awesome experience so far, and I’ve made a lot of great friendships and hope for many more,” said transfer student Magi Zavalova.

Freshman Courtney DeGroot was an athlete in high school and enjoys spending time with students who have similar interests.

“It feels like having a team again,” DeGroot said. “I have made friends and had outside experiences with girls from CHAARG other than just working out together.”

For more information or to join the group, email uicchaarginfo@gmail.com