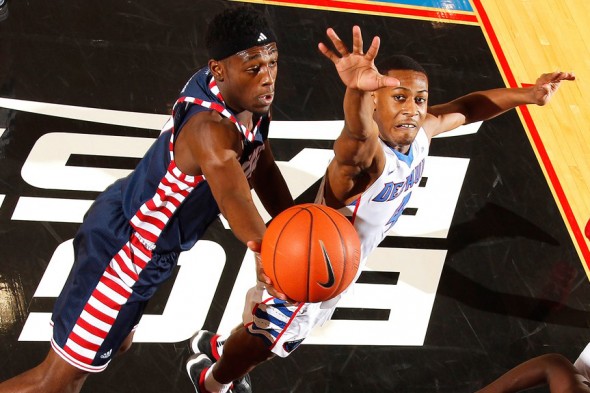 For the second year in a row, UIC needed extra time to decide the outcome at Youngstown State. The Flames scored 16 points and shot 67 percent from the field in overtime to collect a memorable 92-89 victory at YSU’s Beeghly Center.

It was the second consecutive conference victory for the Flames, and the third win in a row away from home.

Youngstown State (8-11, 2-4 Horizon League) tied the game at 76 with less than 30 seconds to play, but the Flames had the ball and a chance to take the lead. Brett Frantz fouled Ferguson with less than eight seconds left. He got the ball again in the closing seconds, but the ball was knocked away and the teams readied for overtime.

The score was tied at 80 with less than three minutes to go in the extra period when the Flames began to pull away. Ferguson hit a jumper in the lane to put UIC ahead, then rebounded Cameron Morse’s miss on the other end. The freshman missed a shot for the Flames, but teammate Godwin Boahen elevated for a critical offensive rebound and Guice buried a three-pointer that gave the Flames a five-point lead.

The burst continued when Matthews scored a layup with 1:06 remaining, giving him a career-high 21 points, and UIC its largest lead of the game at seven points. The lead ballooned to eight points with 49.6 seconds left.

Morse hit a pair of deep, contested three-pointers in the final minute to keep the Penguins afloat, but the Flames escaped with the five-point win.

The Flames received an enormous lift from the bench Saturday as they tallied a season-high 51 points. The dynamic trio of Matthews (21), Ottey (14) and Guice (12) combined to score 47 of those points and Clint Robinson netted four.

Up next for the Flames is a Horizon League match at Valparaiso at 2 p.m. Sunday.