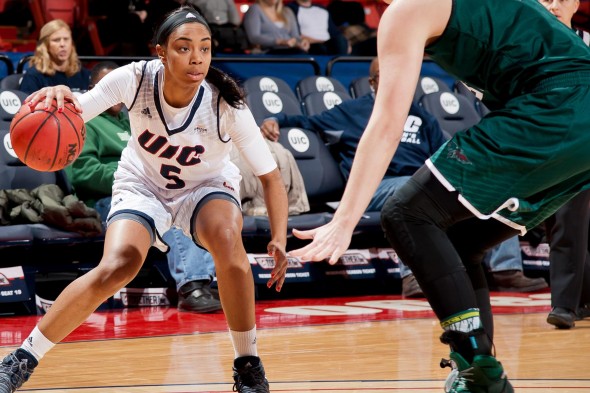 The Flames led wire to wire, set season highs in offensive efficiency, and registered their first Horizon League win of the season with a 74-60 triumph over Valparaiso Saturday at UIC Pavilion.

The Flames (4-17, 1-9 Horizon League) shot 55 percent from the floor, their best performance all year, and assisted on a Horizon League-high 21 of their 26 baskets. Ten of those assists came from Terri Bender, making her the all-time assist leader in UIC history.

Bender got her 455th assist on a Taylor Toney jumper late in the fourth quarter to move past Chrissy Dizon at the top of the list.

Toney led the Flames, setting a career high with 25 points. She made her first 10 shots, finishing 11-for-12. Tyra Carlsten-Handberg had a career high, scoring 18 points and going 3-for-6 on three pointers.

From the start, the Flames were moving well with and without the ball and hitting their shots. Bender got things started with a basket and Toney fought for an offensive rebound in traffic and converted a layup.

UIC led 23-10 after the first quarter, extended their lead to as many as 22 points, and Valparaiso never got closer than 10 the rest of the game.

Carlsten-Handberg had a great first half. She made two three-pointers and showed some nice post moves, including a sweeping step around a Valpo defender ending with a scoop shot.

If Carlsten-Handberg’s first half was great, Toney’s entire game was nothing short of magnificent. The sophomore’s 25 points were the highest by a UIC player all year. She had a team-high eight rebounds.

UIC’s effort on the defensive end was not to be overlooked.  They held Valpo’s shooting to less than 30 percent, including misses on their first 10 tries from three-point range. Laura Litchfield forced a 5-second call, and Bender had a ferocious block late in the game.

The Crusaders made a late run, outscoring UIC 9-2 to pull within 10 points with just a minute left. But they had too many turnovers to sustain a comeback, and the Flames made 11 of 15 free throws in the quarter. UIC’s 81 percent showing at the free throw line (17-21) was a season high.

UIC’s season-long homestand will continue Thursday when Cleveland State comes to town for a 7 p.m. contest at the Pavilion.