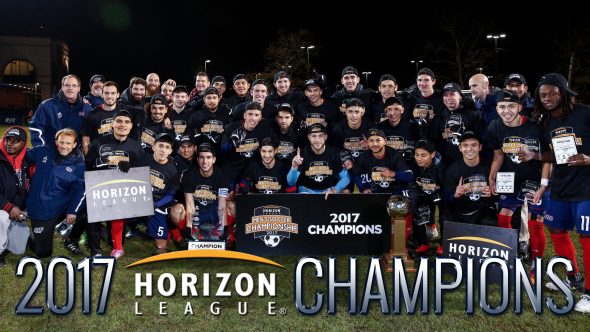 UIC will learn its first round opponent and location during the selection show Monday. The Flames will host a watch party at noon at Ph.D Pub, 1257 S. Halsted Street, east of Flames Field.

Joel Leon was named tournament MVP. Markell Saddler scored his second goal of the tournament at the 77th minute to give UIC a 1-0 lead. Max Todd send a free kick into the net in the next two minutes to double the lead and send the Flames to the NCAA tournament.

The Flames move to 11-5-3 on the season, unbeaten in their last 12 games (10-0-2). Green Bay closes its season at 9-5-3. UIC gave the Phoenix their only two losses in Horizon League regular season and tournament play.

Green Bay held possession early, but the Flames countered. Todd had the first quality shot of the match, dancing into the box and sending a low shot toward the net, forcing Nikola Kahvedzic to make a diving save.

Green Bay’s best scoring opportunity of the first half came in the 25th minute. Brian Vang got behind the defense and sent in a solid shot, which Sawyer Jackman blocked.

The Flames’ back line got in front of a couple of Green Bay shots later in the half. Jesus Perez made a good run from midfield to the top of the box and put a sharp shot on net, resulting in another save.

Abel Guzman worked himself free outside the right post and sent a shot in that Kahvedzic saved but kept in play. Markell Saddler got the rebound and shot it into the empty net.

The Phoenix were shown a yellow card, giving UIC a free kick near midfield. Immediately on the restart, a foul was called on Green Bay. Todd took the free kick from 20 yards out to make it 2-0.

Todd and Guzman had another good look in the final five minutes as Green Bay intensified their attack, but the Flames turned away their desperate advances.
Along with tournament MVP Leon, Perez, Saddler and Todd were named to the All-Tournament team.

Todd took a team-high five shots, with three on goal. He also earned the Flames’ lone yellow card in the 80th minute.

Jackman made 11 saves in the tournament, allowing just one goal. He has shutouts in four of his last five matches.