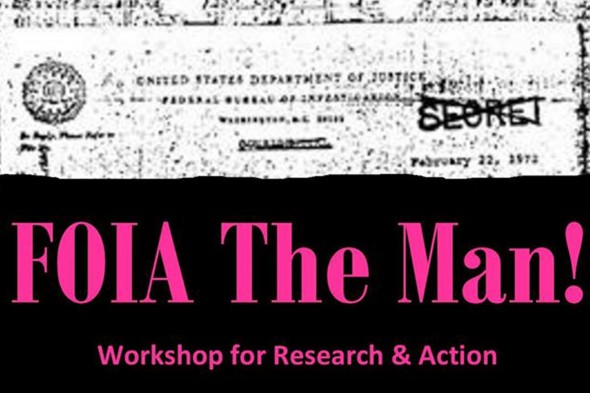 A workshop to teach people how to utilize the Freedom of Information Act, or FOIA, to seek improvements in social justice in Illinois will be hosted Nov. 3 at the University of Illinois at Chicago as part of the Illinois Deaths in Custody Project.

“FOIA The Man! A Workshop for Research and Action,” will be held 6 – 7:30 p.m. at the Rafael Cintrón Ortiz Latino Cultural Center Gallery, Lecture Center B2, 803 S. Morgan St.

Sponsors of the program include the museum and exhibition studies program in the UIC School of Art and Art History; the UIC Jane Addams College of Social Work; the Uptown Peoples Law Center; the Prison + Neighborhood Art Project; and the Chicago Torture Justice Memorials.

The Illinois Deaths in Custody Project aims to put a spotlight on suspicious or uninvestigated deaths of people while in police custody across Illinois. The initiative uses an interactive website that serves as both an exhibit and a memorial to archive, highlight and “mourn the deaths of all people in custody in Illinois.”

As part of the workshop, people will look at how the Uptown People’s Law Center has used FOIA to fight for social justice.

The Illinois Deaths in Custody Project is based within the museum and exhibition studies program at UIC, and received the support of a Spring 2016 Dean’s Research Prize from the College of Architecture, Design and the Arts.

UIC graduate students, along with faculty from UIC and Northeastern Illinois University, have begun investigating and programming for the project, which also received the UIC Institute for Policy and Civic Engagement’s Civic Engagement Research Fund grant of $13,000 to launch a series of events to share its research and findings.

In keeping with the institute’s mission to create a more fully engaged community with more effective leaders, the Illinois Deaths in Custody Project aims not only to reach “citizens and communities to become more engaged in policy debate or deliberative processes” but also to make our “government more responsive to citizens,” said Jose Luis Benavides, a project participant and UIC graduate student in the School of Art and Art History.

Citing an October 2015 analysis, the Department of Justice found that law enforcement agencies underreported by more than 50 percent the in-custody deaths of people who had been arrested, said Benavides.

In addition to workshops, project leaders will educate community members on how to begin FOIA requests to spur community activism. The Illinois Deaths and Custody Project is also seeking online submissions of death reports, eulogies, and other testimonies and documents on its website to provide the public with a public platform to share data and other information.