From Granderson Stadium to Wrigley Field

The new voice of Wrigley Field is a familiar one to UIC fans.

If you’ve been to any UIC home athletic event in the past five years, there’s a good chance that you heard Jeremiah Paprocki on the public address microphone. Paprocki, a senior at UIC who was hired as the Cubs’ PA voice last month, has been honing his craft at Flames’ home games since his Granderson Stadium debut in 2016.

Some might say that the Cubs took a chance on putting a 21-year old college student behind the mic at a major league stadium. Those who have worked with him at UIC would disagree.

“The first day he announced baseball for us, I told Ryan [Ptak], ‘This kid’s going to be a professional baseball announcer,'” said Kyle Decker, who worked in the Flames’ marketing department and was heavily involved in hiring Paprocki in 2016.

Ptak, who writes the PA scripts for UIC’s home events, concurred. “He had not only the voice but the drive to do whatever he needed to do to put himself in a position to get a pro PA gig,” he said. 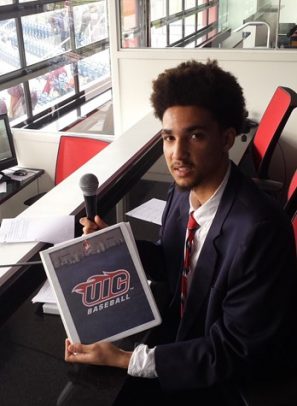 Paprocki at the first UIC baseball game he announced in 2016.

Paprocki was announcing a basketball game at his high school when one of the referees, who was a UIC alumnus and also did some announcing for the Flames, recognized his talent. He put Paprocki in contact with Decker, who scheduled the then-junior in high school to call his first UIC baseball game on March 19, 2016.

“I didn’t know at the time whether it would be consistent or one opportunity,” Paprocki reflected. “Kyle said he wanted to have me back and eventually brought me over to soccer and other sports as well.”

It was while working UIC basketball that Paprocki made one of the many connections that would help shape his career. “Meeting Ray Clay was an honor. In the PA community, he’s a hall of famer,” he said.

Clay, famous for his introductions of Michael Jordan and the world championship Bulls teams of the ’90s, is a UIC alumnus and has been announcing Flames basketball games for years. “I was able to listen to and observe Ray, and backed him up for a men’s game. That was such a huge honor,” Paprocki said.

Clay is just one elite announcer that Paprocki has shadowed. His Twitter account is full of pictures of him with the PA voices of major league ballparks and arenas.

Learning on the Job

Paprocki enrolled at UIC in the fall of 2017 and quickly became a fixture in the athletic department. “Jeremiah has announced every sport that we offer. You name it, and he wanted to voice it,” Ptak said. “Beyond that, when we had videos that needed narration or events that needed an emcee, he just wanted his voice on as many microphones as possible. He took all of them seriously. He would take the time to learn how to call soccer or swimming and diving.”

On the rare occasions that Paprocki was not announcing a game, he would be on hand to help out in another capacity. “He was a really important asset for us, not only for PA, but in his passion for athletics,” Decker said.  “He helped us in game operations as a student. He was so reliable and his passion for sports stood out.”

Learning the ins and outs of each sport’s behind-the-scenes operations became a valuable asset to Paprocki’s PA experience, augmenting the immense preparation he became known for.

“In doing our due diligence, we learned about his passion for PA announcing and how much he had done to hone his craft,” Decker recalled. “What impressed me most about Jeremiah was from Day One he was just so prepared.  Light years beyond any 16 year old, and in all honesty, in terms of preparation beyond anyone I’d ever seen.  Jeremiah made up for inexperience with preparation.”

As Paprocki gained experience, he learned to adapt to the ever-changing environment of live sports. 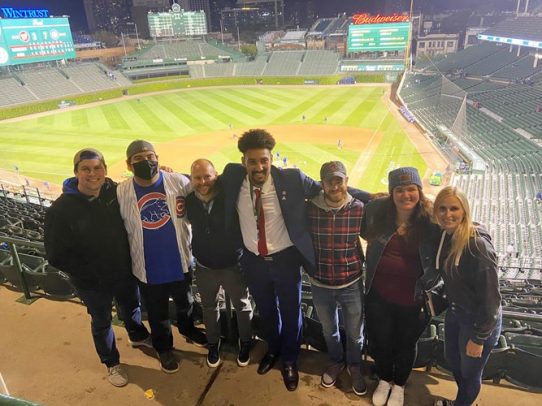 UIC Athletics staff with Jeremiah Paprocki after Paprocki’s first game as the voice of Wrigley Field.

“At UIC, they always said to expect the unexpected,” he said. “There are a lot of moving pieces in sports, especially as an announcer reading stuff in a live environment. Things change frequently, and I definitely sweated a few times on the mic at UIC when something changed at the last minute and I didn’t know how I was going to enunciate something. Those situations taught me to take it slow, prepare yourself, adjust on the fly, and now I’m a lot more confident in the larger scale of the Cubs to deliver at the last second.”

The stages got bigger as Paprocki continued to improve. He has called Horizon League championships in baseball and softball, and was one of the PA announcers for the NCAA Gymnastics Championships, held at Credit Union 1 Arena in 2018.

“That atmosphere was awesome,” Paprocki remembered, adding, “Calling our baseball and softball championships were awesome memories as well.”

Paprocki’s depth of experience was one of his biggest assets when the Cubs’ job came open this season.  “Announcing baseball definitely helped,” he said. “Baseball gives you more freedom to announce so understanding how baseball works, the umpire signals, pitching change, pinch hitter, being aware in those situations were similar pieces on a bigger scale.”

Having already worked with Decker and Ptak to tailor his resume for professional PA opportunities, Paprocki was ready to jump when the Cubs posted their job.

Naturally, those who worked and became friends with Paprocki during his time at UIC were overwhelmed when they heard that he landed the Cubs’ job.

“I felt shock for sure, in a good way,” Decker said. “It was shocking that the Cubs were willing to take that risk on a 21 year old. After the immediate shock, it was overwhelming pride. I’m so excited for him and so proud of him.”

Ptak concurred. “Proud is the first thing I felt.  He put himself in that position, he earned the opportunity, and kudos to the Cubs for recognizing it.  He was going to be in that seat eventually and it speaks volumes that the Cubs realized that as a 21-year old college student.  The pro teams know what they’re looking for and have a whole talent acquisition group that fleshes this out.

Paprocki will start his senior year at UIC in the fall — and he notes that his classes will be online, “So I have freedom to work at my pace and work around the Cubs’ schedule, so I’ll be able to attend all the games with no problem.”

He further plans on continuing to announce Flames’ games as his schedule allows.

“College basketball goes from November to March, and baseball goes from April to October, so I should be able to do their whole season,” he said, adding, “And I can even do some soccer if the Cubs are out of town!”