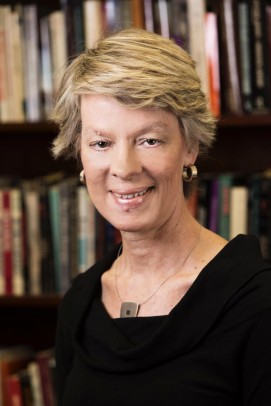 Keely Stauter-Halsted, UIC professor of history and the Stefan and Lucy Hejna Family Chair in the History of Poland. Photo: Elizabeth Monge

University of Illinois at Chicago historian Keely Stauter-Halsted has been named the winner of two literary prizes for her book “The Devil’s Chain: Prostitution and Social Control in Partitioned Poland.”

The awards for Stauter-Halsted, UIC professor of history and the Stefan and Lucy Hejna Family Chair in the History of Poland, come from the American Historical Association and the Association for Women in Slavic Studies.

“‘The Devil’s Chain’ provides a panoramic yet exquisitely detailed analysis that illuminates the place of prostitution in the political imaginary of partitioned Poland, as well as in the lived experience of reformers, physicians, politicians, and sex workers,” the Kelly Prize committee said in a statement. “Unearthing rich archival evidence, Stauter-Halsted reveals how a moral panic became the staging ground for concerns about international migration, critiques of imperial government, and the emergence of women as political and social actors in a modernized nation-state.”

Stauter-Halsted will be honored during a ceremony at the association’s 131st annual meeting in Denver in January.

Her second literary accolade, the 2016 Barbara Heldt Prize, is granted by the Association for Women in Slavic Studies for the best book in Slavic, East European, and Eurasian women’s studies.

The Heldt Prize committee cited Stauter-Halsted’s “painstaking research, the readability of the monograph and how it challenges Polish historiography to put gender at the center of any discussion on nation and state-building.”

Stauter-Halsted is an expert in the history of modern East Central Europe with a concentration on the history of Polish lands during the 19th century. She has written extensively about non-elite social classes and excluded population groups in Polish society, including peasants, Jews, lower-class women, and labor migrants. Her current work examines questions of citizenship and the impact of return migration in Polish history.

Among her other publications is “The Nation in the Village: The Genesis of Rural National Identity in Austrian Poland, 1848-1900,” which won the Polish Studies Association’s Orbis Prize for outstanding book on Polish affairs in 2002.

The American Historical Association is a nonprofit membership organization founded in 1884 and incorporated by Congress in 1889 for the promotion of historical studies. As the largest organization of historians in the United States, the AHA is comprised of approximately 13,000 members and serves historians representing every historical period and geographical area.

The Association for Women in Slavic Studies sponsors research and teaching for scholars interested in women’s and gender studies in Central and Eastern Europe, Russia and Eurasia.