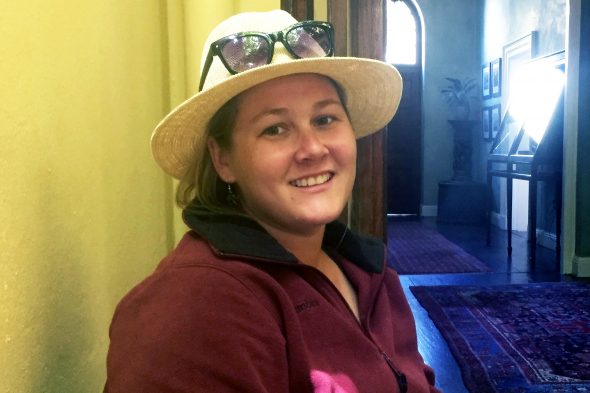 Elsa Anderson, a doctoral student in biological sciences, was awarded a Fulbright grant to study how human activities influence plant and insect communities in Berlin, Germany.

Beginning in January, Anderson will spend 10 months studying herbaria and museum insect collections in Berlin and working with the Technical University of Berlin; Museum of Natural History; and Berlin-Dahlem Botanical Garden and Botanical Museum to conduct studies and other research involving plants and insects found in the Spandauer Forest. The area, which is about 10 miles west of the city’s downtown area, was bisected by the Berlin Wall for about 30 years before the wall was destructed in 1989.

“Walls can impact how species move across a landscape,” explained Anderson, an urban ecologist. “We’re going to be doing a study of the trees, herbaceous plants and insects in this forest to see if, even though the wall is no longer there, there are differences in composition of species that would be evidence of a legacy effect on this forest.”

The research is important for understanding how what we do can change our environment.

“Our actions have consequences on the ecological landscape of an area, and we can detect all sorts of things in the composition of a species that are directly related to human activity,” she said.

It also ties in with Anderson’s research in Chicago. Here, she’s based in associate professor Emily Miner’s lab in the Institute of Environmental Science, which focuses on urban landscape ecology. Anderson’s work looks at vacant city lots and assess the social inputs that drive the biodiversity patterns in those spaces.

“[Chicago and Berlin] are cities that have had to rebuild substantially in the last 100 to 150 years, and they have similar climates,” Anderson said. “Understanding broadly how human activities are shaping these large-scale environmental processes goes hand in hand.”

She feels honored to have won the award and hopes to use what she learns to benefit people, plants and animals living in cities.