LARES looks back at past, ahead to future at 40th anniversary event 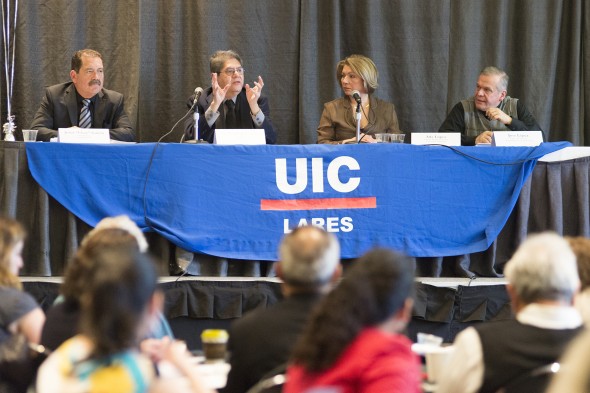 LARES (Latin American Recruitment and Educational Services) is marking its 40th anniversary year, and on Monday a panel took a look at where it’s been and where it’s going.

Moderator Jesus “Chuy” Garcia, a Cook County commissioner and former mayoral candidate, noted that one of the organization’s first actions was to mount a 1975 march by 500 people protesting the Chicago Public Schools’ initial delay in building what became Benito Juarez High School.

Ramirez, who had a staff of two when he took over LARES in 1980, said it does “behind-the-scenes” work on behalf of undocumented students and provides support for students who get no federal or state aid.

“UIC should be a truly institution of learning,” Ramirez said. “Universities are among the most segregated institutions.”

As a former university trustee, Ada Lopez said, “One of the things I learned was how disconnected the board was from those in the front lines. There was a gap between the trustees and the programs.”

She said that “programs like LARES are not only successful, but they add value that has never been acknowledged. LARES has been an ambassador for diversity.

“The principles that drive LARES are sound, more relevant than they have ever been. We have to protect what we have and build on it.”

During Q & A, Jose Lopez said that in Humboldt Park, “social capital of the community is brought together. You engage parents, teachers are intellectually challenged.”

The community has 11 schools, Lopez said. “We’re working to get our students into the best colleges,” he said.

An audience member asked, “What is the difference who the next president is?”

“It has to be a Democrat,” replied Ada Lopez.

“Which one?” asked Garcia.

“We’ll let others answer that one,” Lopez said.