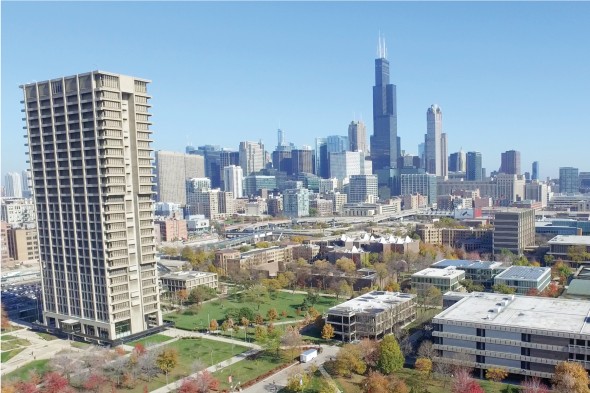 UIC is one of the nation’s top 30 lesbian, gay, bisexual and transgender-friendly colleges and universities in the latest edition of the Campus Pride Index.

UIC, which is in the top 30 for the third time, is the only institution in Illinois named in the 2016 ranking. The list, now in its eighth year, highlights the most LGBTQ-inclusive colleges and universities for policy, programs and practices.

“This recognition from Campus Pride is significant for our campus because it reflects the ways that LGBTQ-inclusion is a shared priority among many units,” said Megan Carney, director of the Gender and Sexuality Center.

“UIC has been a pioneer in some ways, by founding a center for LGBTQ issues over 20 years ago and being the first to start a Lavender Graduation in Chicago 10 years ago.”

According to Campus Pride, the universities highlighted this year were chosen based on their overall ratings on the Campus Pride Index and specific LGBTQ-inclusive benchmarks. This year’s list includes public and private colleges ranging from 807 to over 45,000 students.

UIC earned a 4.5 out of five stars and received top scores for LGBTQ student life, which looked at 14 areas, ranging from how the campus offers awareness of experiences and concerns of the LGBTQ community, to having LGBTQ representation and leadership opportunities.

The campus also earned a top score in LGBTQ housing and residence life based on 11 areas, including the option for LGBTQ students to be matched with a LGBTQ-friendly roommate.

UIC earned five stars in 12 areas, such as the recruitment and retention of LGBTQ students and for developing programs focusing on gender identity and expression.

“Certainly, there’s still work to be done, but this listing helps us to better understand where we fit in the national landscape,” Carney said. “I’m grateful to all of the staff, faculty, students and alumni whose contributions over the years have shaped UIC.”

More information about UIC and the other ranked schools is available online.

“Prospective students and their families today expect colleges to be LGBTQ-friendly. They want to know what LGBTQ programs, services and resources are available on the campus, and which are the ‘best of the best,’” said Shane Windmeyer, executive director of Campus Pride and creator of the Campus Pride Index. “Now more than ever, there are colleges that are recruiting LGBTQ youth, and they are investing in a campus that is fully supportive of LGBTQ students. This top 30 list showcases those top campuses leading the way.”