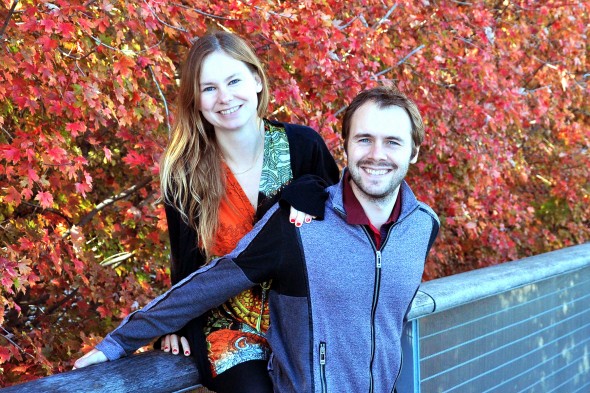 Schaposnik, assistant professor of mathematics, and Unwin, research assistant professor of physics, are among about 500 internationally renowned scientists and scholars selected for the competitive fellowships, which were established by the Federal Republic of Germany for the promotion of international research cooperation. The foundation’s network of more than 27,600 alumni in 140 countries includes 52 Nobel Prize winners.

Schaposnik will study algebraic geometry and complex analysis with scholars at Freie Universität in Berlin during the next three summers. Her research at UIC is focused on geometry, with the aim of understanding geometric techniques in different areas of mathematics and physics.

“I’m especially interested in exploring new ideas arising from the geometry of Higgs bundles, which are my main tool at work,” she said.

Unwin will be based for the next two summers at the Deutsches Elektronen-Synchrotron (DESY) Research Institute in Hamburg. He will be part of an international team investigating the observational impact of dark matter, a theoretical particle which is thought to compose 80 percent of the matter in the universe.

“While scientists have long agreed that dark matter exists, it has never been directly observed,” said Unwin, who is a theoretical physicist. “As a result, little is understood about what dark matter is, or how it behaves.”

His research, embracing astrophysics and high energy physics, seeks to bridge the gaps between available theoretical models and the results produced by experimental physics.

Schaposnik and Unwin are domestic partners, and both earned their doctorates at the University of Oxford. Since arriving at UIC in 2015, both have been active in efforts to promote young women’s participation in science and mathematics. They have organized campus events for the annual Sonia Kovalevsky Days, which are part of a national program of workshops, talks, and problem-solving competitions for female high school and middle school students and their teachers.