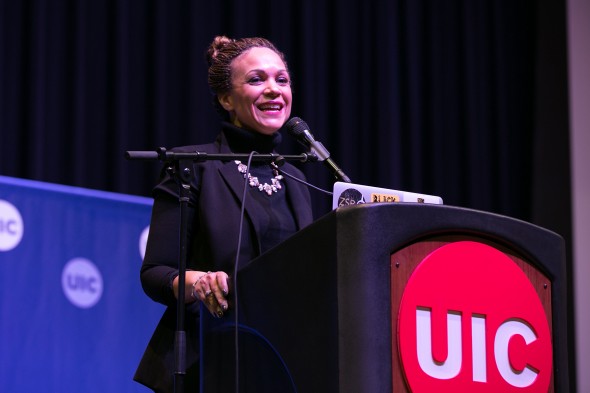 Harris-Perry, the Maya Angelou Presidential Chair in politics and international affiars at Wake Forest University and former MSNBC host, spoke about the realness of the racial inequities faced by black Americans.

“It’s not about who’s lying, yet what truths are missing,” said Harris-Perry, executive director of the Pro Humanitate Institute and founding director of the Anna Julia Cooper Center.

Using comedic relief, hardcore facts and slideshow images, she talked about seriousness of racism in America. She used euphemisms such as “Where’s Ella?” and “Where’s Sasha?” to allude to absence in the media of representation of black girls and women. She noted the exclusion often is across the board, not only when it comes to reporting on violence and black women, but also in terms of exposing the public to black female scholars and artists.

The subject of politics was not off limits — including the inauguration of President Donald Trump.

“This may be the first time in history when black people are nostalgic,” she said as she laughed and referenced the years Barack Obama was president.

“Dr. King did not come out of a rock, he came out of a community…We wait for the Messiah, as black people, instead of realizing we are the movement,” she said.

The stories we tell about America influence the outcome of our future nation, she said.

“Representation is important. We often do forget to tell certain stories,” said Jackson-Lucas, a senior in psychology. “We preach diversity yet lack events like this. These events should be put on display for all cultures.

“I believe in equality for everybody…helping everybody of all races.”