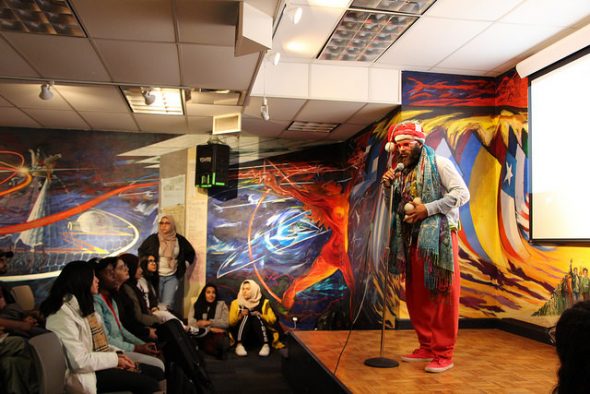 When I entered the gallery space in Latino Cultural Center (LCC) where Noche de Poetas is hosted, I was engulfed by a feeling of warmness. Music was playing, and there was an array of free food during the Oct. 10 event. People were smiling and getting settled in their seats. The room was packed with students, faculty and community members, all united by the night’s theme of “mental health.”

The LCC is famous for its wall-to-wall mural, “El Despertar de las Américas” (“The Awakening of the Americas”). While sitting in the gallery, you are surrounded by the vibrant colors and depictions of the brave people that the mural encompasses. This reminded me of the importance and strength of speaking my mind.

The event was hosted by Keaton Fisher, who shared several poems throughout the course of the night. Fisher also discussed his personal experience with mental health. Mental health is something everyone deals with on a daily basis, but it is rarely talked about, he said.

During the open mic, audience members had a chance to share their poetry. A clipboard was circulated throughout the night, and I saw more and more people sign up to share. There was no pressure to speak, and many people chose just to listen. A notebook also made its way around for individuals to contribute to a community poem.

People from diverse backgrounds took the stage, each sharing a unique perspective on their experience with mental health. There was a common theme of the rejection of mental health dialogue within various cultural communities. I realized that the stigma of mental health was being broken by simply talking about it.

I was awestruck by the speakers who shared their poetry. In my eyes, they all highlighted the true definition of bravery. The audience was exposed to such a pure form of honesty, which has become difficult to find within an increasingly disconnected society. Most people hide behind social media, in a sense connected more than ever with one another, but not actually aware of each other’s true feelings. Noche de Poetas creates a space for the transfer of spoken word across diverse communities, which ultimately forms a platform for people to support one another.