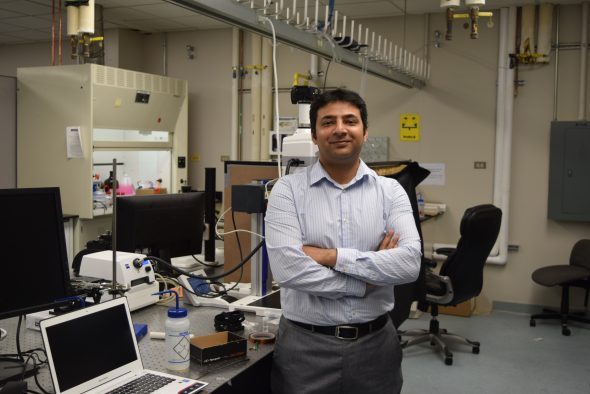 Emulsions, or oil-water mixtures, are of common occurrence in our daily lives.

“In fact, our life begins with emulsions. When a baby is born the very first thing it drinks is milk, which is an emulsion,” said Sushant Anand, assistant professor of mechanical and industrial engineering. “So, we have long relationships with emulsions.”

Emulsions are used in more items than we may realize. They are used in drug delivery, material synthesis, cosmetics, oil recovery, food products, and many multibillion-dollar industries.

One of the most common examples of emulsions is oil and water. And this is an area where Anand and his team developed a new technique for creating emulsions. This work has recently been reported in Nature Communications.

“If you make the emulsions at the nanoscale, which we call nano-emulsions, it improves the stability, the longevity, and improves the property of the whole emulsion,” Anand said. “Typically, when you add oil and water, the oil droplets will coalesce with each other. But if you add certain stabilizing agents, which we call detergents, then you prevent the coalescence of the droplets. Now, you can make the droplets discrete and, at the nanoscale, it improves the stability, the longevity, and it increases their absorption capacity as drugs, etc. It’s very efficient to go to nano-emulsions.”

The most prevalent method for making an emulsion is based on a homogenization process, where oil and water are added together and stirred until they break. The faster it’s stirred, the finer the droplets get. There are several disadvantages for this process. The action is energy intensive and it can create side effects like the heating of the solution, which are especially adverse for something like drug delivery applications.

Anand has found a new way to make nano-emulsions and his technique is very scalable. It’s much more energy efficient than the homogenization techniques used in the industry.

“The way we make the emulsions is we take oil and we cool it down in an environment where there is humidity in the air,” Anand said. “When we cool down the oil with a surfactant, then the water drops condense and self-immerse into the oil. Then we get a dispersion of nanoscale emulsion in the oil. We have shown what factors the emulsion formation by our technique depends upon.”

With this new technique, Anand and his team (Ingrid Guha and Kripa Varanasi at MIT) have discovered the role of the surfactant concentration, the role of the condensation time, how long to condense and its behavior changes.

“This work is unique in the sense that you can get a nanoscale emulsion in two minutes if you have enough surfactant,” he said. “We have uncovered many new phenomena during this work. We have found that presence of surfactant can change the oil and water interactions; specifically, it changes the way oil spreads on water. That is the key to formation of nano-emulsions. We have found that as more and more water condenses on the system, it leads to depletion of the surfactant and that can increase the size of the droplet. Overall, we have built a new way to make oil and water emulsions, and this technique is just the beginning and we can extend this technique to make more complicated emulsions.”

This new technique enables a bottom-up approach to forming small-scale emulsions and has the potential to open new routes to creating emulsions, colloidal systems and emulsion-based materials.

“This is a very powerful technique for making emulsions, and we are working on many different applications for this process, including drug delivery in a partnership with researchers at UIC medical campus. There are going to be lot of challenges to be overcome in that process, but that is what makes the research exciting and we are confident that we can overcome them.”