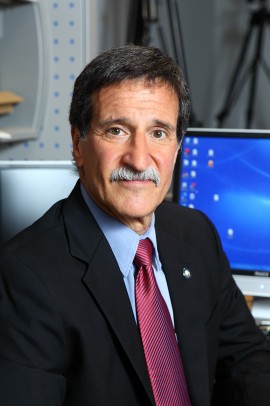 Mark Grabiner, professor of kinesiology and nutrition in the College of Applied Health Sciences, received the 2017 Borelli Award from the American Society of Biomechanics during its annual meeting in August. The award, which recognizes outstanding career accomplishments and exemplary research in biomechanics, is named for 17th century physicist, physiologist and mathematician Giovanni Alfonso Borelli. Borelli is considered the father of modern biomechanics.

Grabiner’s research focuses on understanding falls by older adults and people with lower extremity trauma or amputation. He researches how the body’s nervous system controls movement during slips, trips and falls to the side.

Falls are the sixth-leading cause of accidental death in older adults, and fall-related health care costs are escalating as the population ages.

“Originally, I thought I’d solve this problem in five to seven years,” said Grabiner, who is also director of the Clinical Biomechanics and Rehabilitation Laboratory, professor of bioengineering, and serves as an associate vice chancellor for research and research integrity officer.

“I’m still working on it,” he said. “It’s mind-boggling in terms of its complexity.”

As the 2017 award recipient, Grabiner was invited to deliver a keynote address at the conference. He discussed three decades of his teams’ efforts to understand the mechanisms underlying falls and develop new technology and methods to intervene on those mechanisms, and to demonstrate their effectiveness in reducing falls.