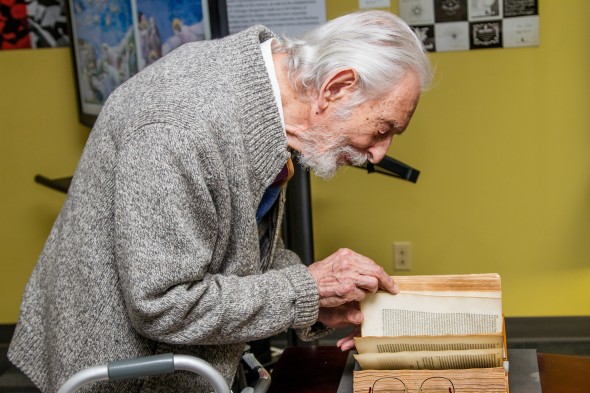 Retired UIC psychology faculty member Louis Berman donated a rare art history book to the UIC Library, the 1568 edition of Giorgio Vasari’s “The Lives of the Most Excellent Painters, Sculptors, and Architects, from Cimabue to Our Times.” (Photo: Vibhu S. Rangavasan)

When retired University of Illinois at Chicago psychology professor Louis Berman was a young graduate student in the 1950s, he attended a library book sale in another state and found a thick, yellowed book lying discarded in a heap on the basement floor. It was in Italian.

Having learned a smattering of the language as part of his Army training during World War II, Berman scanned the book and purchased it. He would quickly realize that “Le vite de’ più eccellenti pittori, scultori, e architettori da Cimabue insino a’ tempi nostri” (“Lives of the Most Excellent Painters, Sculptors, and Architects from Cimabue to Our Times”) was far from surplus pulp.

It turned out to be from the 16th century, and it chronicled the lives of famous Italian Renaissance artists, including Leonardo da Vinci.

“Perhaps it was discarded because it did not have a cover,” Berman said. “The library was really quite negligent in allowing this book to be sold. It’s a lesson, I suppose, for librarians to be a little more careful about what they throw away.”

Berman, who taught at UIC from 1957 until his retirement in 1989, recently donated the book to UIC’s Richard J. Daley Library, where it will be housed in Special Collections and University Archives.

Valerie Ann Harris, associate professor and associate special collections librarian, said the library is indebted to Berman for his “incredibly generous” gift. Harris, curator of the rare books section, said Berman’s donation will be a valuable resource to students, faculty and researchers.

“To provide them with an opportunity to do hands-on work with a book that is nearly 500 years old is really special,” she said.

Many consider the book’s author, Giorgio Vasari, to be the originator of art history. The painter, architect and writer published the illustrated book in 1568. 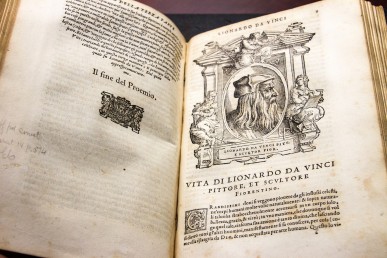 The 1568 edition of Giorgio Vasari’s “The Lives of the Most Excellent Painters, Sculptors, and Architects, from Cimabue to Our Times” includes a passage on Leonardo da Vinci. (Photo: Vibhu S. Rangavasan)

“It is beautifully written by an artist who wants to critically assess other artists,” Fabbian said. “The problem is that his book is full of tall tales and even lies. The language of art appreciation, as we know it today, did not exist — but Vasari’s fiction wonderfully expresses the essence of each artist’s work.”

As examples, Vasari wrote that 15th-century painter Fra Filippo Lippi was driven by his amorous, “beastly” passions; and artist Beato Angelico was a holy man who never painted a crucifix without weeping. Vasari even accused painter Andrea del Castagno of murder.

Of da Vinci, Vasari said, “the loss of Leonardo was mourned out of measure by all who had known him, for there was none who had done such honor to painting. The splendor of his great beauty could calm the saddest soul, and his words could move the most obdurate mind.”

Berman, who is 95 and has a background in art, said he could not see the book going to a book collector who would simply put the book away out of view of scholars. He is proud that students, faculty and others will have a chance to learn from it.

“I realized this was a treasure and that one day I would have to find a home for it,” he said. “I have a special place in my heart for the University of Illinois at Chicago because I was on the faculty when it was just an undergraduate university and I saw it grow.”