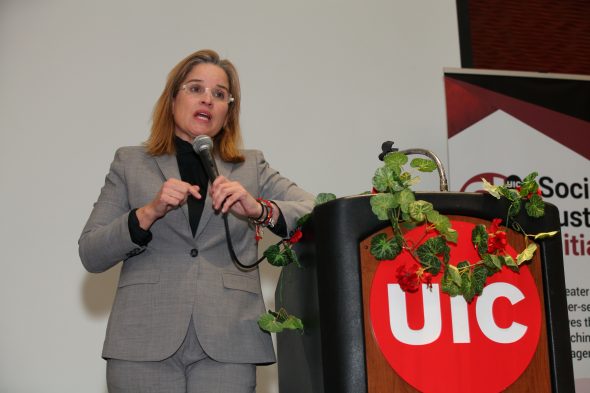 The topic of the symposium was “Puerto Rico, Hurricane Maria, and the Crisis of Colonialism.” This crisis, rooted in what some believe is an imbalance of power between the United States and Puerto Rico — a U.S. territory — is even more pertinent in the aftermath of Hurricane Maria, which hit Puerto Rico Sept. 20, 2017. Some criticized the U.S. government’s response to the crisis.

Cruz shared her belief that Puerto Rico is treated more as a colony than a recognized territory of the United States.

“If anyone had any doubt before Sept. 20, after Sept. 20, it should be a foregone conclusion. Puerto Rico isn’t a territory; it is a colony of the United States of America. That’s it,” Cruz said.

“The time for complacency has passed… Because again you have two choices: You stand up, or you stand down. We move forward, or we shut up and don’t continue to complain.”

Making this distinction is key, Cruz said, as the first step toward a solution.

“In order to solve an issue, you have to accept it,” she said. “That means we have to wake up and not consent to this anymore. I will no longer consent to the systematic injustice and neglect of the people of Puerto Rico.”

Between 75,000 and 100,000 people still do not have electricity, and about 500,000 rooftops still need to be either partially or completely rebuilt, Cruz said.

While Cruz was critical of the U.S. government’s response, she believes it did not reflect the spirit and attitudes of the American people, who individually stepped up on their own.

“I often wonder, ‘What is it about me? What is it? We don’t deserve the laws of nature? We don’t have those (constitutional) undeniable rights? Why? Because we’re Latino? We’re people of color?,” she said.

Cruz also rallied the Puerto Rican community, challenging them to step up, as well.

“As Puerto Ricans, we also have to own up about what we don’t do right,” she said. “We need to change our priorities. We need to make sure eliminating poverty is our number one priority.

“For the Puerto Ricans here: this is the time. There are no more excuses. We either move forward or we don’t move at all.”

Cruz both appealed for people to recognize what she believes is an imbalanced and colonialist-relationship the U.S. has with Puerto Rico, and made a call to action.

“So, we need your help because we have a long road ahead of us,” she said. “We need to diversity our energy production. We can’t be dependent on fossil fuels anymore. We have to make sure that power gets to everybody. I need you to help me. Let them know, wherever they are, that their lives matter. Because we didn’t start this fight, but we’re going to finish it.”