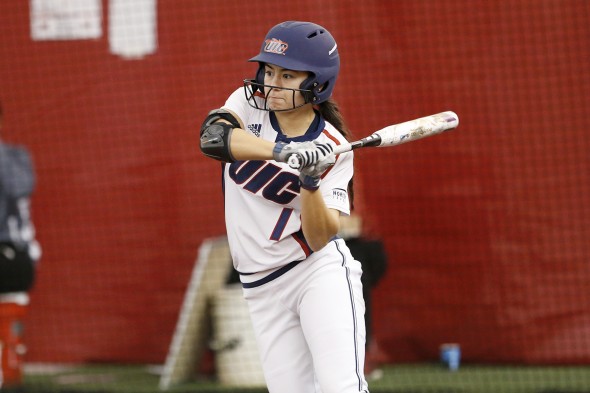 The softball team (21-17, 8-1 Horizon League) collected its second Horizon League series sweep of the season Sunday when it outlasted Youngstown State (16-22, 4-5 HL) in eight innings for the 2-1 win at the YSU Softball Complex.

The Flames put up a series-high 11 hits. Lexi Watts, who drove in the game-winning run, had a team-best three hits, followed by Taylor Cairns and Alice Fitzpatrick with two each. Fitzpatrick also had an RBI on the day.

Allie Trudeau, who dealt the first four innings in the circle for UIC, struck out five, did not give up a single walk and allowed just four hits. Karissa Frazier came in to finish the game and collected her seventh win of the season with two strikeouts, one walk and just two hits given up in the final three frames.

After putting just two runners on across the first four innings with hits from Jasmine Willis and Watts, the Flames loaded the bases in the top of the fifth as Fitzpatrick singled, Jennah Speth reached on an error and Kayla Wedl singled. A strikeout and fielder’s choice ended the frame without a run.

The Penguins converted in the bottom of the inning to score the first run of the game.

With two outs in the sixth, UIC tied the score at 1-1 as Cairns, Watts and Fitzpatrick all singled, with Cairns scoring on Fitzpatrick’s second hit of the game.

The Flames put runners at the corners with two outs in the seventh as Tiana Mack-Miller and Emily Wetzel  earned singles but were left on base.

In eighth, Cairns led off with a single, stole second, then came in to score as Watts hit her fourth triple of the season for the game-winning run.

UIC continues its conference road swing with a midweek series at Valparaiso. A doubleheader begins at 1 p.m. Wednesday.