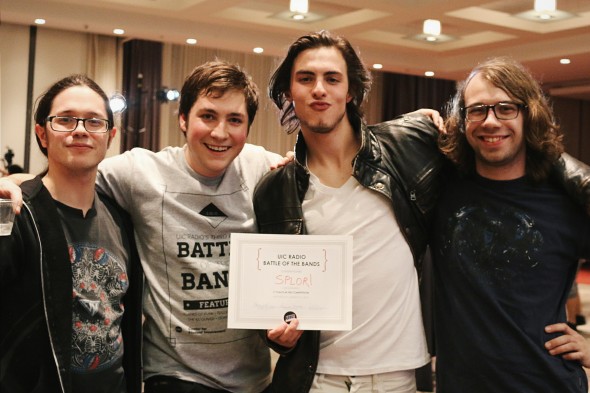 Splor was named the unanimous winner of the Battle of the Bands competition. “Winning was one of the things that just told us our hard work is paying off,” says frontman Jonathan Dombro. Photo: Pearl Shin

Featured performers included The Jades, Goin’ Dark, The P.E.A.S, Splor, and guest performer Flames of Funk. The five bands that took the stage showcased one of the most musically diverse lineups yet.

“I really liked the bands that performed this year. Everyone had something unique to bring forward,” said Sonia Vavra, blog director of UIC Radio and an emcee of the event.

The night began with a soulful, acoustic performance by The Jades, a duo consisting of UIC students Kathleen Lieffers and Katie Krenning. With their blues and rock-influenced powerhouse vocals and witty humor, the two won over the hearts of the audience.

Goin’ Dark, an alternative-rock quintet, was the youngest band in the competition, with members ranging in age from 14 to 18. But their musicianship and drive went beyond their years — they won the fan favorite award.

The P.E.A.S, a four-man band, exerted unparalleled energy, immersing the audience in their pop-punk tunes. Their fun and energetic set got the audience members inching closer to the stage and dancing along.

Splor closed the competition and made an impression immediately. As three of the band members began playing the intro to their first song, frontman Jonathan Dombro jumped onto the stage from within the audience, instantly commanding the attention of the crowd. During their set, the band shared their unique style of music — a genre they dub “adventure music.”

The evening wound down with a special performance by UIC School of Music’s funk band, Flames of Funk. Despite this being the group’s first live performance, the musicians performed with ease. The band jammed out and the crowd swayed along as the judges deliberated.

The decision was unanimous: Splor was named the winner.

“Winning was one of the things that just told us our hard work is paying off,” Dombro said. “We practice a lot even when we don’t entirely want to. It’s nice to know we’re growing as a group.”

Battle of the Bands, UIC Radio