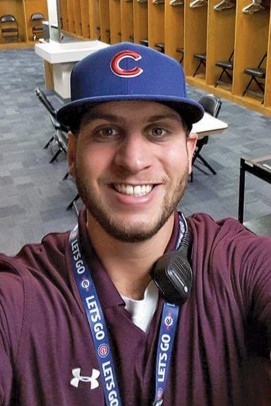 “The Navy taught me to look challenges in the face, accept responsibility and hold myself accountable,” says Jim Wydra.

Prior to becoming a student at UIC, Jim Wydra answered the call of duty and spent five years in the U.S. Navy.

“The Navy taught me to look challenges in the face, accept responsibility and hold myself accountable,” said Wydra, a senior in political science.

During that time, he achieved the rank of Petty Officer Second Class (E-5) as a Master-at-Arms.

Wydra joined UIC in 2015 after his cousin recommended the school.

“My cousin was on the men’s soccer team and told me how much he enjoyed the university,” he said.

Wydra is the secretary and an active member of the Student Veteran’s Association
at UIC.

After graduation, he plans to use his degree and experience in the Navy to serve his country once again.

“I want to use the knowledge and skills I have learned from my experiences in the Navy and at UIC to serve in the State Department,” he said.