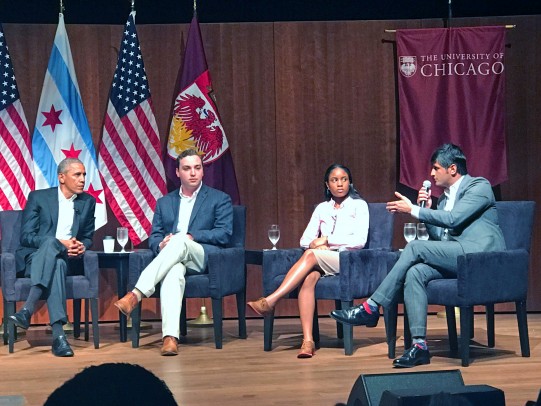 Former President Barack Obama made his first public appearance Monday since leaving the White House to speak with young leaders — including a UIC alum — about the importance of civic engagement.

Representing UIC in the 80-minute forum held at the University of Chicago was alumnus Harish Patel, one of six panelists who shared the floor with Obama, along with 18 standout undergraduates selected to attend as audience members.

The discussion, which also focused on growing and inspiring the next generation of leaders, tied in with what UIC is all about, said Spencer Long, associate director of Student Leadership Development and Volunteer Services.

“To have our students, and other young people on the panel today, hear about ways that they can get engaged politically is not only a priority for our university, it’s also one of our goals for what we’re trying to instill in students as they leave the university,” Long said.

Patel, who earned his bachelor’s (LAS ’07) and master’s (CUPPA ’14) degrees from UIC, is a perfect example of an alumnus who has carried the university’s values with him. The 31-year-old is now a Chicago deputy director for the nonpartisan think-tank New America; co-owner of a fair-trade, organic and naturally-dyed clothing line called ishi vest; and a founding member of the political engagement organization called Chicago Votes. Patel said his commitment to add value to the world began while he was an undergraduate, which is why he was honored to be chosen as a panelist.

“I’m in shock and in awe at the ability to be able to represent our city in a conversation around things that matter to me deeply,” he said.

The group also expressed thoughts about what stops youth from investing in civic life, naming one-sided media, polarizing politics and a narrow definition of civic engagement, among other things, as barriers. Empathy, they said, is one possible solution to the problem.

“We need to be remembering that there’s a lot more that connects us than divides us,” Patel said.

Zoie Sheets, a senior in the Honors College, was grateful that she and other UIC leaders were able to attend.

“To be a change agent, to be civically engaged, that’s just one more catalyst for taking a passion that our students already have and encouraging them to actually use that to create the change that they’re hoping to see,” she said.