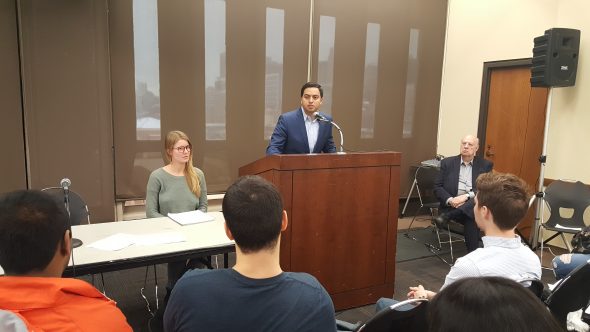 More than 200 UIC students gathered Nov. 10 to discuss the issues they hoped local, state and federal representatives would focus on throughout the coming election and in the government.

The UIC Student Issues Convention, hosted yearly for the past decade by the political science department, offers a chance for students across disciplines to lend their voice to the democratic process by first breaking into small groups and expressing their views on economic, social and political issues that directly affect them. Afterward, the entire group came together and voted on the top five issues which they felt most strongly about.

The top five issues on the UIC student agenda this year were:

Both Republican and Democratic officials addressed these student concerns.

Congressman Danny Davis of the 7th Congressional District spoke to all of the issues and focused on students getting involved in the political system in order to make changes they wish to see.

Former UIC student Robert Reyes, who is running for 24th District state representative, spoke on the need for new generations of leaders to emerge and start making their voices heard at all levels of government.

Longtime Republican activist and lawyer Stephen Boulton stressed the importance of students thinking critically about the issues and coming to conclusions for themselves.

“The convention lets students confront candidates and public official in person,” said former alderman and UIC political science professor Dick Simpson, who coordinates the convention effort. “From this, they learn that political leaders are not so different from themselves and that they do respond to the demands from constituents, even students.

“Our goal is to make students active participants in democracy, and to help them find their voice in what seems at first a large, complicated political system.”