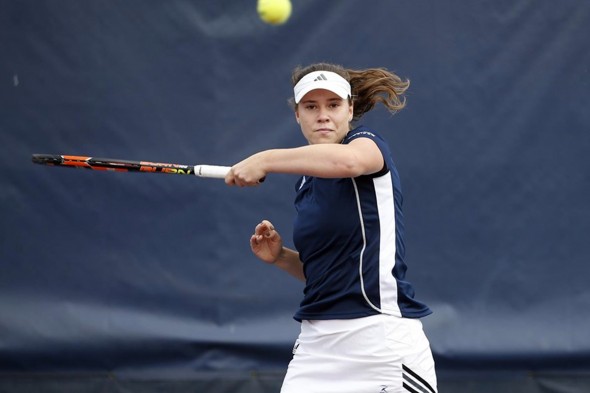 The women’s tennis team opened its 2017 season in winning fashion Saturday by defeating Toledo, 5-2, at XS Tennis. It’s the first time the Flames have begun their dual campaign with a win since 2011.

UIC secured the victory with five wins in singles after dropping the doubles point. Rachel Le Comber led the team with wins in doubles and singles.

The Rockets took the first point of the day after claiming the top two doubles positions. UIC’s Oana Manole and Miranda Rodriguez Diaz de Leon teamed up at No. 1 but fell, 6-3, to Sidnay Huck and Deedee Leenabanchong. Doubles was decided when Mimi Kendall-Woseley and Claire Aleck took a 7-5 decision over UIC’s Georgie Sanders and Melika LeBlanc at No. 2.

The Flames pairing of Le Comber and Stefana Vasic put up a strong effort at No. 3 and knocked off Megan Miller and Colleen O’Brien, 6-4.

The Flames will be back on the court Saturday, when they head to Milwaukee for a 10 a.m. matchup against Marquette at Helfaer Tennis Stadium.