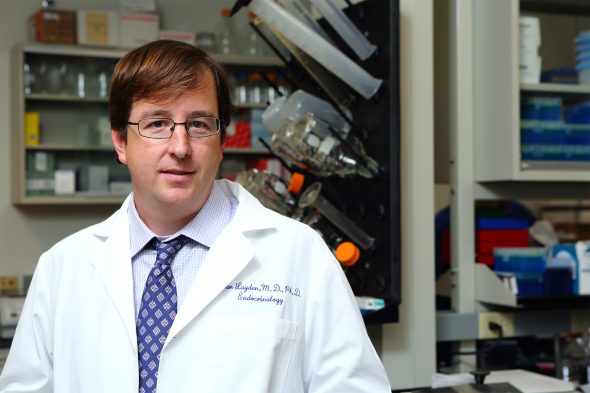 Brian Layden is among UIC researchers who will receive funding from the Accelerator Awards competition.

Three researchers from the College of Medicine will receive funding from the Chicago Biomedical Consortium through the group’s Accelerator Awards competition.

The Chicago Biomedical Consortium is made up of researchers at UIC, Northwestern University and the University of Chicago who work together to make discoveries that will transform biomedical research and improve health.

The consortium launched a new Accelerator Award program in 2018 to support translational research and provide university researchers with early commercial guidance. The awards will provide up to $100,000 for one year and will be used to support the initial — and therefore highest risk — stage of commercially directed research focused on the development of a therapeutic or an associated biomarker or diagnostic.

The program received 32 letters of intent, and nine researchers who submitted letters were asked to present to the Chicago Biomedical Consortium Accelerator Network in early February. Four researchers from the University of Illinois at Chicago presented, and were asked to submit full proposals. Ultimately, three were selected to receive funding. The Consortium selected five projects overall to fund.

Brian Layden, professor and chief of endocrinology, diabetes and metabolism

Layden’s group is developing a new treatment for Type 2 diabetes based on their discovery that New approaches to treat Type 2 diabetes (T2D) are needed. Our group has shown that a protein called FFA3 mediates insulin secretion and plays a role in the development of insulin resistance — a major characteristic of Type 2 diabetes. Layden’s group has shown that blocking this protein could have beneficial effects. They will screen for small drug molecules that can block FFA3. Future work will develop these molecules into compounds that are suitable for testing in vivo and eventually in pre-clinical and clinical studies.

Lavie is working on overcoming these factors using L-asparaginase from guinea pigs. Guinea pig L-asparaginase is very similar to its human form and is less likely to cause an immune response. The guinea pig version also doesn’t break down glutamine. They will develop the guinea pig enzyme so that it remains in the blood, where it can deliver its anti-cancer effects over an extended period of time. They hope to further refine their drug to replace current bacteria-derived drugs in the treatment of acute lymphoblastic leukemia and test it against other cancers.

Komarova and colleagues are developing a new treatment for age-related macular degeneration — a leading cause of vision loss in older patients. Current therapy requires frequent injections into the eye, which is highly burdensome to patients and health care providers. Komarova has designed a new eyedrop-based therapy called EBIN, which has been shown to be effective in treating age-related macular degeneration in a rodent model.  Her group will further develop the therapy with the goal of bringing it to clinical trials in the future.