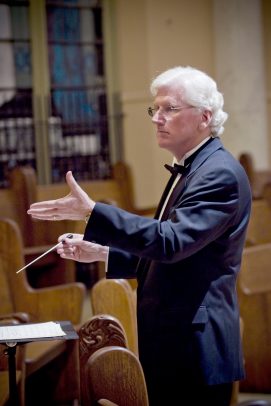 The head of the choral and vocal studies program at the University of Illinois at Chicago has received a two-year appointment to serve as artistic director for a children’s choir in China.

Michael J. Anderson, UIC professor of music and director of choral and vocal studies in the School of Theatre and Music, has been named the artistic director for the Beijing Tianquiao Performing Arts Center Children’s Choir.

Anderson’s recent appointment took place in a ceremony at the performing arts center in Beijing in front of an international audience of choral conductors and singers, said Anderson.

As part of Anderson’s responsibilities, he will make yearly visits to Beijing, where he will hold master classes for the singers and conductors from across China, as well as take part in other international events of interest to the conductors.

Anderson said his appointment springs out of the seven years he served as president of the International Federation for Choral Music, or IFCM, from 2010 to 2017.

“It is the culmination of 32 years of volunteer work with IFCM, which has made my choral music life richly rewarding and allowed me to make a difference across the globe,” Anderson said. “It also has allowed me to travel to many, many countries, experience many new cultures, and facilitated my work to unite these countries through choral music.”

During his work with IFCM, he primarily worked with the China Choral Association and the China Arts and Entertainment Group, the Chinese government agency tasked with sharing Chinese culture around the world, and with many regional choral organizations.

He has presented lectures and master classes in cities within China and presented other events, including The China International Chorus Festival and the IFCM World Choral Education Conference in Beijing, The World Choral Expo in Macou and Shanghai, and a master class tour of 11 Chinese cities to promote Chinese choral music.

In addition to conducting and lecturing in the United States, Europe and throughout China, Japan and Korea, Anderson has also conducted the Guangju Professional Civic Chorale and the National Choir of South Korea, and twice lectured at the National Symposium of the Korean Federation for Choral Music. He also spoke at the inauguration of the Swedish International Center for Choral Music in Örebro, Sweden, which celebrated the 20th anniversary of the IFCM’s World Youth Choir.

“This has translated into my UIC classroom as a means for sharing international music, social understanding, and bridge-building between cultures of the world, as a direct correlation to our very diverse UIC student body,” said Anderson, who joined UIC in the fall of 1990.

He credits the support he has received from UIC, especially the College of Architecture, Design and the Arts, as well as the School of Theatre and Music, which has allowed him to work internationally and supported having a central office of IFCM at UIC for nearly 30 years.

“UIC has been enormously supportive of my international work,” Anderson said. “They have approved my periodic absences from the classroom and have supported bringing international conductors to UIC to work with students and community.”