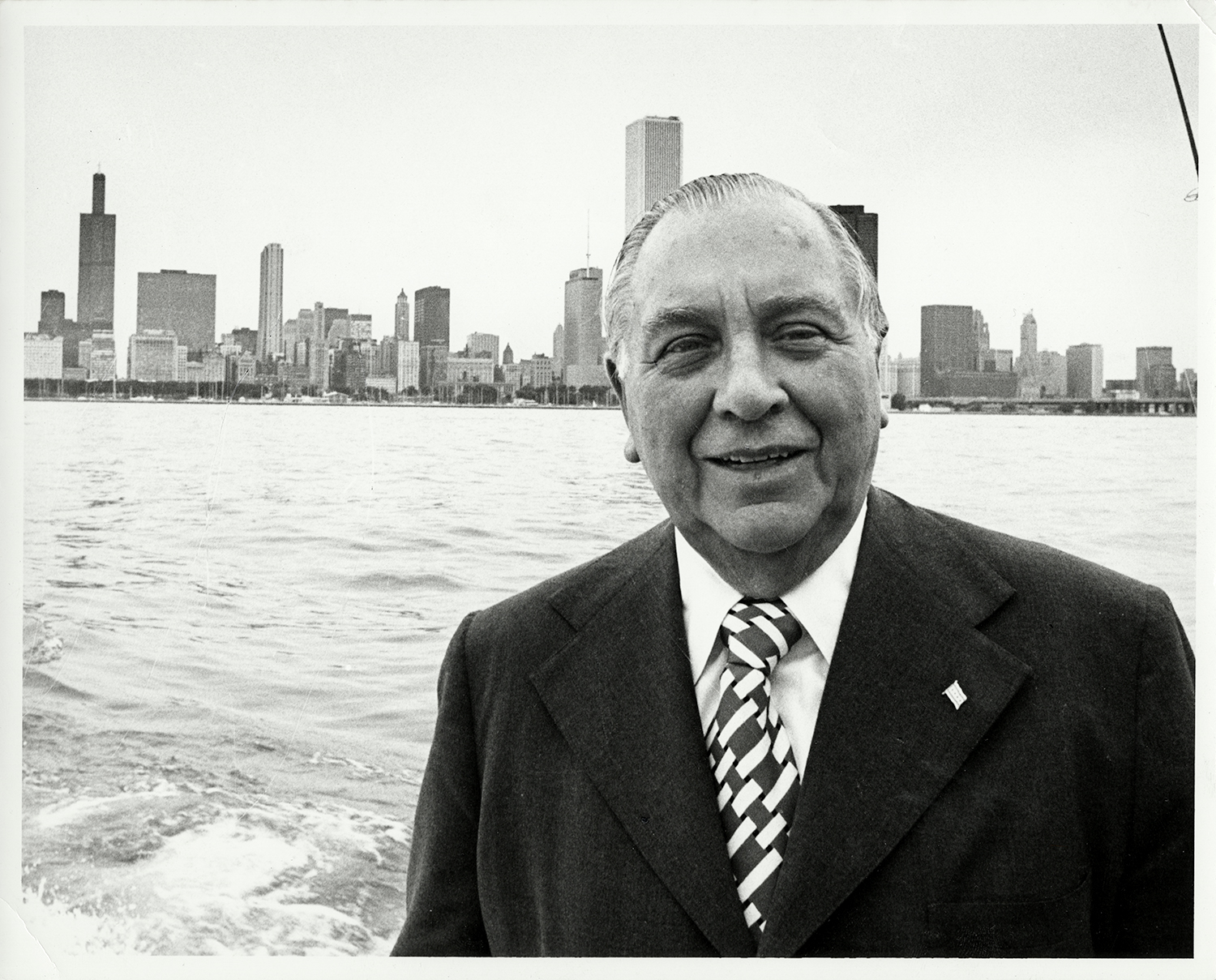 Chicago Mayor Richard J. Daley in front of the Chicago skyline. After Daley died, his family donated his papers to the University of Illinois at Chicago.

When Richard J. Daley died Dec. 20, 1976, Chicago was not the same city that it was when he became mayor 21 years earlier. By the time he died, the tallest skyscrapers in the world were in Chicago, and the city was a required stopover for politicians seeking to run for national office.

Daley’s legacy of working to build up the city of his birth is chronicled in more than 700 feet of personal papers and artifacts housed in the special collections and university archives of the University of Illinois at Chicago’s Richard J. Daley Library.

A series of courses linked to the collection are being planned, ranging from single-credit courses for Honors College students, who represent a variety of majors, to seminars for alumni and community members beginning this spring. 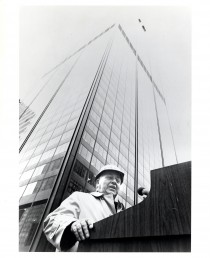 “A lot of times, we definitely see him as a really important Chicago figure, and we see him as a national figure who did things like work with presidents. But in a many ways the issues he was dealing with in Chicago were global issues,” Greenstein said.

Students will meet at the special collections reading room, where they will be able to pore over thousands of pages of first-hand material that illuminate Daley’s political and private life.

Greenstein’s first class, “City at a Crossroads: Local, National, and Global Politics in Chicago, 1968” will be offered spring semester. He is also developing a broader course on the local and global connections in Chicago that Greenstein hopes to teach in the fall.

“It’s going to be a great opportunity for students to learn, not only about Chicago and Mayor Daley, but also about working with original documents and other information-literacy skills,” Greenstein said.

Over the years, more than 200 patrons have used the Richard J. Daley Collection for research, from doctoral dissertations to middle- and high-school history projects, said Dan Harper, lecturer and the special collection’s assistant archivist. Among the topics studied have been the late mayor’s dealing with unions and labor issues, housing and race issues.

UIC library officials also announced plans to offer several fellowships to UIC graduate students, as well as to researchers who live more than 100 miles away. The library offers an annual Richard J. Daley Leadership in the Public Sphere Award for high school students participating in the Chicago Metro History Fair who best utilize the collection for research.

Among the items included in the collection are correspondence with presidents including a signed photo of John F. Kennedy with Daley and his family at the White House after Kennedy’s inauguration. In addition, Daley’s role as a growing force within the Democratic National Committee is detailed through correspondence with the committee. His role as the host of the tumultuous 1968 Democratic Convention is chronicled through correspondence that details plans for the event and discusses its aftermath.

Among the more unusual items are several stuffed bass that were mounted and kept as keepsakes when people in Daley’s family caught their first fish.

The collection was given to UIC at the behest of Eleanor “Sis” Daley, his wife of 40 years. She donated the papers to the institution whose creation the mayor considered one of his great achievements, said their son William. 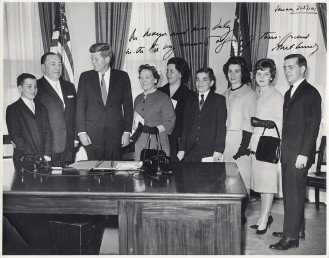 Mayor Richard J. Daley with his family in the Oval Office with President John F. Kennedy.

“My dad always said the greatest decision he made in his entire political career was the decision to fight for the University of Illinois having a Chicago campus,” William Daley said. “Having the library in his name and having the collection there and making it a vibrant, living, experience is really important to us — and I think is important to the city.”

William Daley, who served as White House chief of staff to President Obama and as U.S. secretary of commerce under President Clinton, said he and other family members believe the collection should serve not simply as a museum of artifacts, but as a living collection.

“Here we are, 40 years after his death and many of the issues he dealt with are still being dealt with, whether it’s race, whether it’s crime, whether it’s development,” said Daley. “It’s a very different city — demographically, economically and culturally — but it’s a stronger city because of the 21 years he devoted to it.”