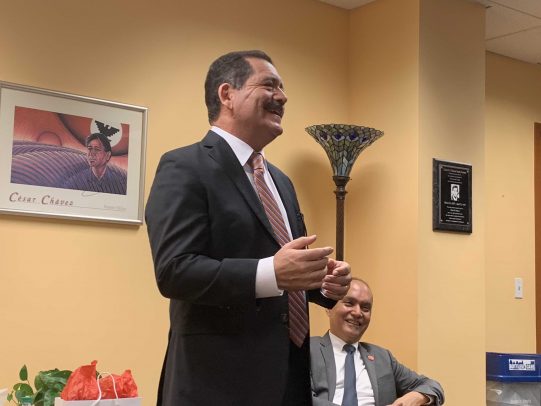 Speaking before students and faculty members of the Latin American Recruitment and Educational Services Program (LARES), U. S. Rep. Jesus “Chuy” Garcia said Thursday that even with his decades in government and his recent election to Congress, one of his greatest achievements was when he earned his master’s degree from the University of Illinois at Chicago.

“It was one of my proudest achievements and I took great pride in it,” Garcia said. “The culmination of that pride was when I graduated…my mother got to see me get my master’s and I had my cap and gown and I walked properly. I was so, so proud.”

Garcia, who first earned his bachelor’s in political science at UIC before going on to receive his master’s in urban public planning and policy, joked that it took him decades to complete two credits for his bachelor’s because he was too busy running for elected office and working as a community organizer.

“It took me 25 years to get my bachelor’s degree…I don’t recommend that model,” he joked.

Garcia, who represents Illinois’ 4th district, which formerly was represented by Luis Gutierrez, spoke to several dozen students at the LARES office in the Student Services Building, where he was asked about issues ranging from immigration to transportation.

Sheccid Eloisa, a junior who is studying marketing and business analytics, asked Garcia what he planned to do to help make higher education more affordable for students.

“What if they are facing financial issues, what do you plan to do now that you have the power to help us have more financial ability to go to school?” Eloisa asked.

Garcia, who emigrated from Durango, Mexico, with his family in the 1960s, said that among his goals during his time in Congress is to address the issue of immigrants in this country who are classified under the Deferred Action for Childhood Arrivals (DACA) program.

The program allows people who entered the country illegally as children to receive a renewable two-year period pass to stay and makes them eligible for a work permit. But they are not eligible for federal financial aid.

“Addressing the condition of DACA young people is a concrete way to try and help individuals who are facing among the biggest obstacles, completing their education,” Garcia said.

He said that since U.S. Sen. Bernie Sanders first brought up the idea of providing free public higher education to students in need in the 2016 election, the topic has gained more credibility. He said he is a co-sponsor of a bill that seeks to make public education free for students in need.

“Just like having a high school diploma was a must through the end of the 20th century, having a higher education degree is that important and a prerequisite for most employment and professional career tracks,” Garcia said.

Jose Ramirez, a senior studying business, asked how he would address the issue of young people who feel a sense of hopelessness and, because of criminal records, believe higher education is unattainable.

“I think we need to remove concrete barriers that they face,” said Garcia, who pointed to how Cook County prosecutors are moving away from cash bail requirements that disproportionally affect people of color. “The criminal justice system needs, urgently, lots of reforms.”