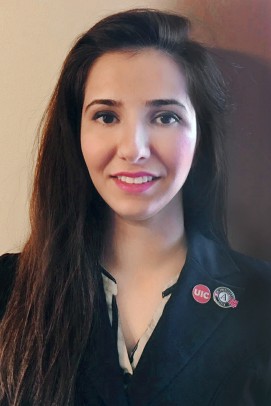 Rima Nimri, a graduate student in the College of Urban Planning and Public Affairs, was named a 2016 Newman Civic Fellow by Campus Compact.

Rima Nimri, a graduate student in the University of Illinois at Chicago’s College of Urban Planning and Public Affairs, was chosen as a 2016 Newman Civic Fellows Award recipient.

The fellowship program is administered by Campus Compact, a national nonprofit coalition of more than 1,000 colleges and universities, dedicated to campus-based civic engagement. It honors students who are “proven leaders, with both the motivation and ability to make substantial contributions toward public problem-solving,” according to the Campus Compact website.

Nimri is a public and financial policy management major from Chicago’s Hegewisch neighborhood. She has worked on several civic engagement projects, both at UIC and in the community, with organizations such as Illinois Campus Compact, AmeriCorps Volunteers In Service To America, and the UIC Institute for Policy and Civic Engagement.

“In these roles she has taken on progressive responsibilities and proven herself to be a strong leader who works to motivate others,” said UIC Chancellor Michael Amiridis, who nominated Nimri for the award.

As part of AmericaCorps VISTA, Nimri spent a year working on behalf of the Center for Civic Engagement and Community Service at Governors State University. She worked with faculty, students and staff to coordinate and lead various community outreach and partnership projects. She was later promoted to a VISTA leader position to recruit and coach project teams.

Nimri, who received her bachelor’s degree in communication from UIC in 2011, will represent the university in a national group of student leaders as part of the Newman Civic Fellows online network and also participate in statewide activities.

The Newman Civic Fellows Awards, which are named in tribute to Campus Compact co-founder Frank Newman, are made possible through support from the KPMG Foundation and the Newman’s Own Foundation.