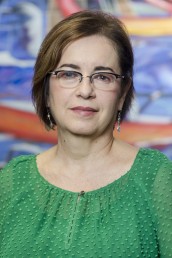 Rosa Cabrera, director of the University of Illinois at Chicago’s Rafael Cintrón Ortiz Latino Cultural Center, was recently honored by the Chicago Cultural Alliance for her efforts in leading the formation of the consortium of Chicago-area ethnic museums, cultural centers and historical societies.

The Chicago Cultural Alliance honored Cabrera and Alaka Wali, curator of North American Anthropology in the Science and Education Division of the Field Museum, during its 10th anniversary celebration as “Cultural Champions” and founders of the alliance.

Prior to joining UIC, Cabrera was at the Field Museum, where she led the “Cultural Connections” program, a partnership of more than 25 ethnic museums and cultural centers in Chicago that formed the Chicago Cultural Alliance in 2006, under her leadership.

Cabrera, who served on the board of the alliance from 2008 to 2017, has conducted research in many Chicago neighborhoods to better understand how cultural values and traditions affect residents’ understanding and practice of eco-friendly activities.

She has focused extensively on the role of ethnic museums and cultural centers in shaping community identity — which was the topic of her dissertation. She has collaborated with the museum and arts communities on national projects such as the Immigration Sites of Conscience Network, Americans for the Arts’ New Community Visions and the Humanities Action Lab.

Cabrera, who came to Chicago from Cuba with her mother in the ’70s, said that her years as an undergraduate student at UIC opened her eyes to many possibilities and creativity.

“Coming to UIC was a whole new world, I started taking courses in art history, archeology, and at that point, it opened the world to something that I was not familiar with,” said Cabrera. “The most interesting part of my work at the Field Museum as I worked with Chicago’s diverse communities to deepen cultural understanding was tackling the difficult questions.”

Cabrera is affiliated with the UIC department of anthropology, the Latin American and Latino studies, or LALS, program, and the department of art history’s museum and exhibition studies, or MUSE, program. She is also a Keller Science Action Center Associate at the Field Museum.

Her research interests include the role of museums in civic participation and community identity formation; Latino identity and citizenship; the intersections of environmental sustainability, cultural diversity, and social justice; and the role of the arts to increase public dialogue on pressing social and environmental issues.