A discovery from researchers at the University of Illinois Chicago may lead to new treatments for individuals who suffer from alcohol use disorder and depression.

The study, “Transcriptomics identifies STAT3 as a key regulator of hippocampal gene expression and anhedonia during withdrawal from chronic alcohol exposure,” is published in the journal Translational Psychiatry by researchers at UIC’s Center for Alcohol Research in Epigenetics. 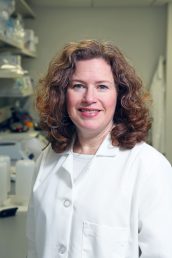 Amy Lasek, associate professor of psychiatry and anatomy and cell biology at the UIC College of Medicine.

“During withdrawal from long-term alcohol use, people often suffer from depression, which may cause them to start drinking again as a way to self-medicate. If we can treat that aspect, we hope we can prevent people from relapsing,” said Amy Lasek, UIC associate professor of psychiatry and anatomy and cell biology at the College of Medicine, and an author of the study.

One of the RNA transcripts that was changed makes a protein called STAT3. STAT3 is a transcription factor that controls the expression of many different genes, including immune response genes. Notably, several known STAT3-regulated genes were also increased in the hippocampus during withdrawal from alcohol, indicating that STAT3 might be a “master regulator” of several genes in the hippocampus during withdrawal.

The rats were treated during withdrawal with a compound that blocks STAT3 activity. The rats’ withdrawal-induced anhedonia, or inability to feel pleasure, was alleviated.

Additionally, researchers looked at the same genes in human postmortem hippocampus samples of individuals who had a medical diagnosis of alcohol use disorder, alcoholism. They found that STAT3 and its target genes were elevated in the postmortem hippocampus of human subjects who died without alcohol in their systems — in withdrawal or abstinent from alcohol — when compared to samples from control subjects who did not have alcohol use disorder. These results were strikingly similar to the results found in the rat study.

“The human and rat studies are similar, which might mean that our rat results can potentially be applied to humans. We haven’t done any treatments of people with alcohol use disorder, but we can see from the rat data that if we block STAT3 during withdrawal we can alleviate depression,” Lasek said.

Some genes regulated by STAT3 are involved in the innate immune response in the brain. There is a known connection between hyperactive immune response and major depressive disorder, Lasek said.

“We know that chronic alcohol use can induce an immune response in the brain. By inhibiting STAT3, we think that we are dampening that hyperactive immune response by blocking the ability of STAT3 to increase the expression of these immune-response genes during withdrawal, Lasek said.

Lasek said inflammation in the brain is currently a hot research topic and further research may determine if dampening the brain’s inflammatory response could treat psychiatric disorders.