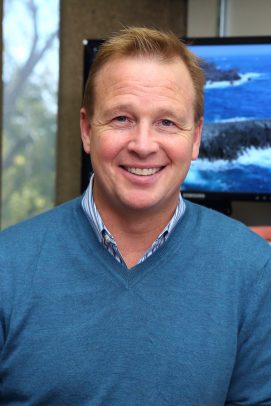 “Robots are the ultimate tool for pushing on people in any way that you’d like,” said Patton, professor of bioengineering. “A lot of times, what it takes is giving people a kick or a punch to understand how the nervous system actually gets the job done in fixing mistakes.”

Patton’s work aims to help shed light on how to treat movement disorders.

“We’ve been able to use robots to make someone more skilled at moving in certain ways,” he said.

His research can help patients with brain injuries or strokes, for example, better understand how to control their body movement while recovering.

“A person who has had a brain injury is learning how to drive their new nervous system,” he said. “There are some things left that work, and other things that don’t work anymore. We can use some of our techniques to teach new movements and apply this to patients.

“People learn from their mistakes, so if you make their mistakes bigger artificially using a robot, you can get people to learn faster and better.”

The patients he has worked with have re-learned how to move certain parts of their bodies after suffering injuries.

Patton’s passion for bioengineering was fueled by his desire to learn more about how robots — and humans — control their movement.

“It’s really interesting – how do you make your arm move? How do I know that my hand is around my cup of coffee so that now I can squeeze it and bring it up to my mouth without spilling?” he said.

Patton has spent the past decade conducting research and teaching at UIC. He also is director of the National Center for Rehabilitation Robotics and a research scientist at the Shirley Ryan AbilityLab.

“I enjoy the interaction of teaching and research — it’s opened me up to a lot of people across campus, and it’s nice to have crosstown interactions, as well,” he said.

He teaches graduate students in courses on topics such as control systems in bioengineering, neural modeling — using math and engineering to study the nervous system and physiology — as well as in problem-based learning classes.

“With problem-based learning, students have to learn everything they can about a problem and bring their engineering design and research tools to the table to solve the problem,” he said. “It’s fun to be part of that.”

He keeps his students engaged by focusing on challenging problems and describing the history of science.

“I like to tell stories about famous dead people,” he said.