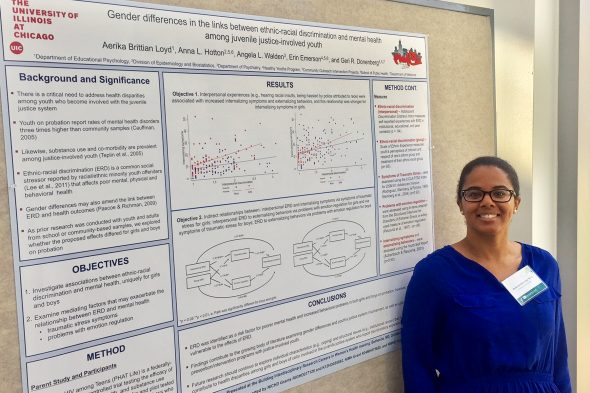 University of Illinois at Chicago Assistant Professor Aerika Brittian Loyd served as the lead author of the paper, “Racial/ethnic socialization for White youth: What we know and future directions.”

While teaching and talking about race and ethnicity with children and adults is especially important in racially diverse societies, this process known as “racial/ethnic socialization” can lead to tensions for white youth as communities become more diverse, according to a research paper published in the Journal of Applied Developmental Psychology.

University of Illinois at Chicago assistant professor Aerika Brittian Loyd, who is in the department of educational psychology, served as the lead author of the paper, “Racial/ethnic socialization for White youth: What we know and future directions.” The paper is part of a forthcoming special issue in the Journal of Applied Developmental Psychology titled, “Where Diversity Meets Inclusion: Applied Developmental Perspectives.”

“There are implicit and explicit messages about race and ethnicity everywhere including in homes, schools, neighborhoods, and the media,” said Loyd. “It’s especially important for adults to be talking with youth about race given the current social climate, and we need to understand how people make sense of diversity in their world.”

Loyd, who serves in UIC’s College of Education, and co-author Sarah Gaither of Duke University, discuss the fact that despite the importance of racial/ethnic socialization, also known as RES, how this process unfolds in the lives of white youth has not been widely analyzed.

“In comparison to people of color, white people typically do not have to navigate racial issues from the same position of how to function in mainstream society,” they write. “Investigations of RES have missed an important opportunity to empirically assess when and how RES promotes social inclusion among white youth.”

In their paper, the authors outline findings from prior research on RES for white youth from early childhood through young adulthood. What they find is that implicit bias is resistant to change while a preventative approach — early socialization and learning — is more effective than simply trying to unlearn deeply ingrained prejudice.

They argue that while historically attending college and entering the workforce would often be the first exposure many white people had to racially diverse groups, current population projections signal a major demographic shift in the next 50 years, according to Loyd and Gaither. Asian-American, Latino and mixed-race populations represent the fastest growing racial and ethnic subgroups and should result in more non-white births than white births for the first time in U.S. history, according to U.S. Census Bureau figures.

“These social transitions will likely impact how white individuals discuss racial/ethnic issues and situate themselves in various social settings,” they write. “In the current political climate, researchers have observed that some whites who think about becoming a numerical minority feel angrier toward people of color, exhibit increased racial biases, and demonstrate more sympathy for their white ‘ingroup.’”

Among their findings, the authors write that talking directly about racial/ethnic issues may be lacking within most white family home environments and school settings. They also write that children form beliefs and attitudes about racial/ethnic differences regardless of whether adults choose to engage in discussions about them; and that social interactions can have both positive and negative effects on how white children perceive race and ethnicity. Finally, they say RES should play a more prominent role in white children’s development.

“Without exploring how white youth are socialized about race and ethnicity and how that socialization influences how they approach cross-group interactions and form racial/ethnic attitudes, our current understanding surrounding race relations will remain unbalanced,” according to the authors.