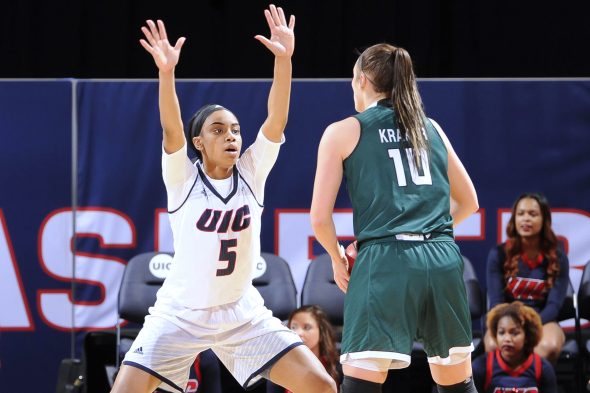 Taylor Toney had a game-high 22 points. Gabryelle Johnson had 11 rebounds. Teodora Zagorac scored the first six points of the second half as UIC rallied from a one-point deficit.

The Flames will return to action at 4 p.m. Thursday when they host Jackson State.

Abreanna Lake provided a spark off the bench, making a three-pointer and assisting on two Toney baskets as the Flames turned a one-point deficit into a six-point lead.

Freshman Tia Tedford ignited the offense in the second quarter. She picked a Pilot’s pocket and used a nice pass fake to create an open layup. Later, she found open space inside the arc for a pullup jumper.

Zagorac scored six points early in the third quarter. Catera Etheridge added a three-pointer, and Tylah Lampley’s layup capped a 13-2 run that put the Flames up by 10.

UIC led by as many as 20 before the Pilots went on an 8-2 run midway through the fourth quarter. Toney stopped the spurt with a layup.

Lampley and Deja Anderson-Fitzell clamped down on Bethel’s late-game efforts, altering shots and disrupting passing lanes as the Flames built the lead back up to the final margin of 20.