Women’s soccer pulls away with 2-1 win 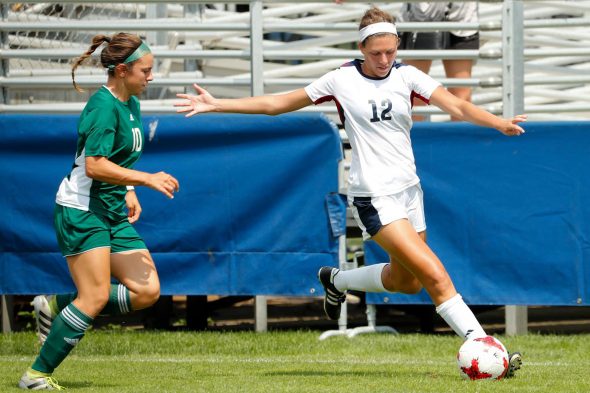 UIC will close out its four-match road swing with a midweek matchup at Green Bay at 7 p.m. tonight.

Tamae Douglas and Emily Valentine scored for the Flames Saturday, with Valentine netting the game-winner.

Youngstown State threatened to score first on a penalty kick in the 19th minute, but Tara Khayam got a hand on the ball and knocked it away for the save.

Douglas gave the Flames the 1-0 lead in the 28th minute. The reigning Horizon League Offensive Player of the Week headed the ball in after Janai Cedeno sent in the cross that connected with Everin and went to Douglas.

The Penguins forced a 1-1 tie heading into halftime after scoring in the 44th minute. A foul just outside the 18-yard box set Sophie McFarland on the free kick. She made a short pass to Marissa Martin, who had the ball hit off the crossbar and into the goal.

A hand ball in the box in the 68th minute awarded the Flames with a penalty kick. Valentine took the attempt and converted for her third penalty kick tally of the season.

Khayam earned her second win of the season after making five saves.