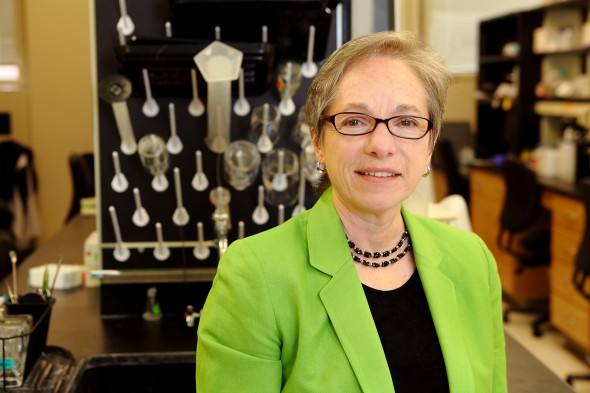 Luisa DiPietro, professor of periodontics, is a fellow of the American Association for the Advancement of Science. ­(Photo: Jenny Fontaine)

Luisa DiPietro, professor of periodontics in the College of Dentistry and director of the UIC Center for Wound Healing and Tissue Regeneration, was named a fellow of the American Association for the Advancement of Science, an honor bestowed upon AAAS members by their peers.

Each year the Association elects members whose “efforts on behalf of the advancement of science or its applications are scientifically or socially distinguished.” DiPietro was the only UIC faculty member named a fellow this year.

“It’s truly a privilege to have been elected an AAAS fellow,” DiPietro said. “I feel very humbled to be among the many distinguished scientists who have received this honor.”

DiPietro studies the process of wound healing and tissue regeneration following injury. She and her coworkers have discovered several key differences that dictate whether wounds heal perfectly or with scars, and she and her colleagues have identified a number of characteristics that distinguish the rapid and scarless wound healing that occurs in the oral mucosa, the tissue lining the mouth.

“Our lab has shown that the privileged healing that occurs in oral mucosa is characterized by reduced and regulated inflammation, and the rapid establishment of a mature capillary bed,” DiPietro said. “Of clinical relevance is our finding that a pharmacologically induced reduction in capillary growth leads to reduced scar formation in skin.”

The approach, DiPietro said, could ultimately be used to reduce skin scarring in patients with severe injuries, such as burns. Her current work also focuses on the genomic regulation of wound repair and the development of computational models of wound healing.

DiPietro is actively involved in training and mentoring the next wave of scientists.

“At the end of the day it’s often not our own discoveries, but instead the scientists that follow us that become our legacy,” she said.

DiPietro has mentored more than 60 trainees at all levels and serves as faculty adviser for the UIC Postdoctoral Association. She is the director of the UIC Center for Clinical and Translational Science KL2 junior faculty career development program.

Throughout her career, DiPietro has received more than $14 million in funding from the National Institutes of Health; her work has been continuously funded by the NIH since 1993. She has served as principal investigator of one of four National Institute of General Medical Sciences National Centers for Innovative Wound Healing Research.

American Association for the Advancement of Science, Center for Wound Healing and Tissue Regeneration, College of Dentistry, dentistry, wound healing